Alonzo was born Augusta County, Va. In the spring of 1850, his family moved to Madison County, Virginia where his father was the pastor at the Hebron Luthern Church.[12] They remained there until the spring of 1856, when his father took charge of the Lutheran Church in Berne, Albany County, NY.[6].[4] Alonzo was to remain in Berne and Albany for the remainder of his life until he went to serve in the Civil War. In 1862, Alonzo attended a singing school with many of the other young people in Berne.[13] Alonzo Grove Ludden was said to have followed in his father's footsteps. He was a very religious young man, who by the age of 15 years, was teaching in the Sabbath school and leading the choir at the Lutheran Church in Berne.[1]

This devotion to God and his country led Alonzo to enlist on October 18th 1862 at the age of 16 in the Civil War.[8] He returned from service in September of 1863 in bad health.[8] When he had recovered sufficiently to obtain employment, he went to work at Mr. Gray's bookstore in Albany. There within 3 months, he was promoted to book-keeper and bank clerk. However his health problems continued and by November 10, 1864 he had to return home as he was no longer able to work. His illness, which was described as consumption, killed him just three months later.[1]

Alonzo died on February 16, 1865 in Berne.[1] While in the Civil War, he became sick during the expedition against Post Hudson and this illness ultimately killed him. His funeral services were held on Saturday February 18, 1865 at the Lutheran Church in Berne and were attended by a large audience that included ministers from the churches in the area.[1] He was buried at the Gallupville Rural Cemetery in Wright, Schoharie County, NY.[2]

Altamont Enterprise June 8, 1898 On Memorial Day June 5, 1894, members of the Charles McCulloch Post No. 645 GAR, old veterans, school children and residents celebrated Memorial Day by visiting the gravesite of Alonzo G. Ludden and holding exercises that included prayers by Rev. LeGrand Jones, singing, a Benediction by Rev. Mr. Force. They then decorated graves of veterans throughout the cemetery.[14] 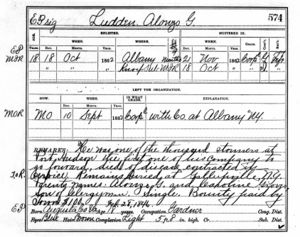 Knox - Alonzo Luddon, Jr., corporal, 1y7th Regiment, Company I; enlisted October i, 1862; mustered November, 1862; was one of the "1,000 stormers" at Port Hudson and the first of his company to advance; died of disease contracted in service and is buried at Gallupville, Schoharie County.

Died of disease acquired in service after returning home Feb 15th 1865. He was one of the thousand storms at Port Hudson first one in Company to go forward buried in Gallupville Cemetery Schoharie Co