How I remember it 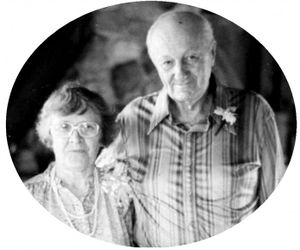 I was born on June 12, 1912 in Schenectady New York. I was born at home; you didn’t go to the hospital in those days. I had 3 brothers later on. My father’s name was Bernard Hemstead and he was born up at the top of Cole Hill in January 1882. My mother’s name was Agnes Ruth Knapp. There were 14 children in my father’s family and 8 in my mothers.

We lived in what they called Factory Village in Schenectady. My mother didn’t send me to school until I was 7 years old. It was a mile and a quarter to walk on dirt roads and she felt I was too little a girl for that and there was no transportation at that time. I went to a school where there were 8 grades all in one room. We finally moved to Scotia and lived on 5th St. and I went to the Scotia school. I graduated from 8th grade there.

When we left Scotia, we moved up on Settles Hill. My parents felt that the environment in Scotia was bad for my brothers and so we moved up to a farm in the Helderbergs. In the wintertime we would ski. My brother Arthur and I just loved to ski. We moved down from Settles Hill to Dunnsville and later we moved to the farm in East Berne.

We had to walk about a mile to school in all kinds of weather. The school was heated with a big pot bellied wood stove in the middle of the room. There were about 16 children in grades 1 thru 8. There was no electricity. Why I didn’t see electricity until I was married. They didn’t put electricity in Berne until about 1930. We used kerosene lamps where I lived with my folks and I had to fill them, and continued to do that even after I got married. I had to wash the chimneys every day because they would get all smoked up and would not shine very bright. We had outdoor bathroom facilities with three seats, two big ones and a little one for the kids. One day my father came home with a crystal set and you had to use headphones with it to hear. We got quite a thrill out of that. You could hear people talking and they were not even there. That is when radio was first coming out. I had a girl friend who lived on a farm about a quater mile down the road, her name was Ruth Lowey.

My father didn’t get much of an education. He quit school when he was 12 years old with only a third grade education. My grandmother was a schoolteacher and she taught him how to write his name and do figures. He went to work at the General Electric when he was 13 as a messenger boy. By the time he was 19 he was a foreman over 20 men and later he became foreman for buildings 16 and 23. He worked there all his life, over 50 years. My mother was the best you could ask for, she used to play piano and sing to me when she put me to bed. She even sang at the Ballston fair one year.

When I was 14 or 15 we lived on the farm in East Berne, up by Elmer Longs. We had a car by that time. My mother bought the first car we ever owned, because my father didn’t want one. She bought a Ford touring car and taught herself how to drive it. It had levers on either side of the steering wheel for the gas and the spark. You had to advance the spark just so before someone would crank the car to start it and if it wasn’t right the engine would kick back. This happened to my brother once and it threw him across the garage and bloodied his nose. We were living in Scotia when my mother bought the car.

When we lived in East Berne we did not have any electricity or indoor plumbing. When we were small we bathed in a big washtub and when we got too big for that, we just used a big basin of water and washed all over. We did have a telephone at that time and it was a party line with 6 or 7 parties on it. One ring was for the operator, two for the Hempsteads, 3 for Brownell, 4 for Whites, 5 for Longs and 6 would be for someone else. Many times other people would listen in on your conversation. We had a cistern in the cellar to hold the rainwater from the roof but you didn’t dare drink it and all the hot water was heated on the wood stove. Drinking water was carried in from the well outside.

You all remember when Lindbergh flew across the Atlantic Ocean, well when he landed in France, they all had poppies for him. My mother thought it would be a great idea for me to bring poppies to him when he came to the Schenectady airport. We had lovely poppies in our yard, so my brother Leo picked a nice big bouquet for me to take. I had a nice white linen suit that I had got down at the Carl’s Store in Schenectady; I must have been 14 or 15 at the time. My mother and I went to the airport; I had my white suit on and a big bouquet of poppies for Mr. Lindbergh. Colin Hager used to be the announcer at W.G.Y., which at that time was a very large and popular radio station. All the spectators had to stay behind a roped area away from where the plane was going to land. As the crowd got bigger I was pushed more and more until I was almost thru the ropes and my flowers were taking a beating. Finally Colin Hager came over and lifted up the rope and let me under, he said, “ That by the time Lindbergh landed I wouldn’t have any poppies left.” Bye and bye the airplane landed and they had a big speakers platform set up for him, I must say he was a very good looking young man. Mr. Hager came and got me by the arm and took me up to the platform where Mr. Lindbergh bent down and took the flowers and patted me on the head and asked me my name. Later my aunt and cousin Dorothy saw me on the movie screen at Proctor’s Theatre in a newsreel that was shown before the main film. Lindbergh got on with his life and got married and so did I. We both had a little boy and they were born on the same day, June 22, 1930. Lindberg’s little baby got killed and when that happened, I held my little boy and cried, I felt so badly for him. We wrote a few letters back and forth and I have an autographed picture he sent me.

I met my husband Howard while he was driving truck for the county and they were building the road past our house. We eventually got married and I moved to Howard’s house on Rte. 43 in Berne. We lived with his mother and his sister. That home is where I raised my family and where I still live today.