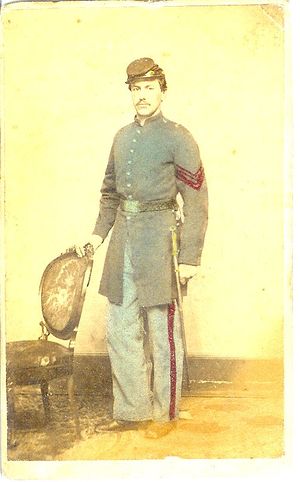 On November 17, 1860 at St. Paul's Lutheran Church in Berne, James married Elmina Gallup.[1] Elmina was born January 24, 1837 and was the daughter of Nathaniel Gallup and Sarah Walden.[1]

They had the following children:

James Edwin Jones was a farmer. After his service in the Civil War, he and his young family moved from Berne to Melrose, Jackson County, Wisconsin. After living there for a number of years, by 1880, they had moved to Dorchester, Saline County, Nebraska where they remained.

James Edwin Jones died on April 3, 1905 in Dorchester, Saline County, Nebraska.[1] His wife Elmina had previously died on October 25, 1895 in Dorchester.[1] They were buried at the Dorchester Cemetery in lot 410 where many of their children were buried years later.