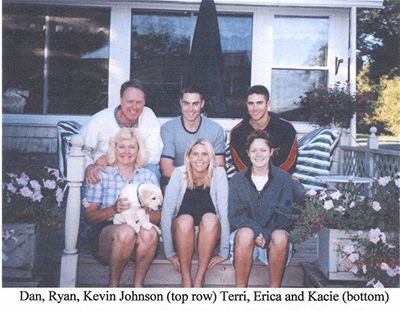 In August of 1967, Matthew and Pearl Schnurr, owner of what is now the Hofbrau, sold the 6 rental cottages, the Willow Teahouse, laundry building (now fondly known as “the barn”), and garage to 3 of the Barker sisters and their husbands. Grant and Florence Barker Young bought the teahouse, the barn, and 2 cottages bordering Schnurr’s. Richard (Dick) and Mae Barker Willigan bought the two middle cottages, and George and Margaret Barker Homand bought the two cottages bordering the Warner property. At that time, water was obtained from the lake and bathroom facilities were reached by going outside to the rear of each camp in what some might term “outhouses”. Shortly after the sale, the group dug a well, found on the third try by use of a vining stick. It has serviced all 7 cottages to date without once running dry. In 1954, the Willow Teahouse was dismantled by Grover Cleveland of Berne, New York and rebuilt at his home for an airplane workshop. The Youngs had Charles Haluska of East Berne, New York build a log cabin in the same spot, and it continues to be occupied by Florence Young. 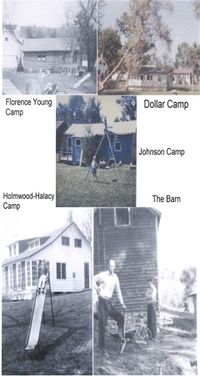 Camps at the north end of the lake

In 1972, Dick Willigan passed away and Mae Willigan sold her two cottages to Florence Young. Bill Terko, Florence’s nephew, and his wife Marge bought the back cottage in 1978, Bob and Gail Young Dollar the lake front one in 1978, and Dan and Terri Young Johnson the middle of the three Florence originally owned in 1977. The Homand property has been sold to the Halacy family, relatives of Marge Terko, after the passing of George, Margie, and Mildred Joralemon, their daughter.

Growing up at Warner’s Lake was one of the best experiences a kid could have. I remember sitting on our boathouse watching the road for my father to come home from work. I would run up the driveway to his car to greet him and he would exclaim “From hell to heaven in just 30 minutes!”. I think that is how everyone felt. Days were spent swimming in the wonderfully cool lake, playing with the clay from the bottom of the lake, catching frogs, and learning to row a boat so we could explore the swamp. We spent most of the day in the lake, covering ourselves with clay when our parents told us to get out and stay out. It never failed that they would send us back in the water to clean the clay off!

Since four of the seven cottages were rented, there was never a shortage of kids. The family that rented for the most summers was the Femia family: John, Ginny, Gail, Denise, John Jr., and Rick. They spent 13 summers and became like family. While the adults spent their evenings playing card games like May I, Canasta, and Chase the Ace, we would be outside catching night crawlers and lightening bugs with our bare hands or playing our favorite game of Hide and Seek. The goal was always the big tree in front of the Willigans, who were known to everyone as Aunt Mae and Uncle Dick. Our obsession with the game led us one day to Mr. Warner’s cow barn so we could hide amongst the hay bails in the hayloft and play during the daytime. We ran like the wind when he came in to milk the cows and almost caught us. Aunt Mae and Uncle Dick Willigan were favorites of all the kids. Whenever anyone of us got a fishhook in our hand, sand in our eye, or a bee sting, we went to sit in “the Doctor’s chair” in their camp instead of running to our mothers. They didn’t have children of their own, but had the love and admiration of every child who knew them. Uncle Dick was famous for loading his car with all of us to buy ice cream at Duke’s Dairy Bar or to go for candy at Pangburns. 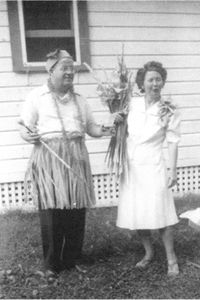 Old Bessie was an inflatable pontoon raft from the Army Surplus the Young’s had in front of their camp around 1948-50. It was jumped on and off by all the children and laid upon by the adults. 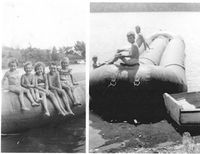 My Father built a floating boathouse, mounted on 50-gallon drums, to cover our speedboat. I think it was the only one that ever appeared on the lake. It had walkways down each side with a door in the middle, so you could get in and out of the boat. It was brought up on shore for the winter.

As a teenager growing up on the lake, our group of summer friends was from all sides of the lake. We spent our days skiing and motor boating as we could fill a tank of gas for $2.00 at the gas pump on the water at Pangburns. We also spent many hours swinging over the water on the two rope swings on the lake, one on the wooded northwest shore and one at the Schlegel’s camp on Dyer road. Donny Schlegel often thrilled us all by getting on the roof of his camp, swinging over the lake, and then dropping into the water.

At night we would often take moonlight cruises on the lake. With a slight breeze, the moon would make the lake look like it was covered in sparkling diamonds. Other nights were spent huddled under blankets in the Adirondack Chairs starring at the magnificent star-studded sky counting stars, looking at the Milky Way, trying to find constellations, and watching for shooting stars.

There was a creek that ran through the Young’s property from the road down into the lake, going beneath the current Johnson camp. There was a bridge over it between the Johnsons and Dollars. The County began to run pipe down from the road and fill to cover it. The work stopped after Election Day, and the Youngs had to finish the job.

There is a game I played as a child that I still play with my children. When riding in the car to the lake, we would all watch for the lake as we turned onto Warner’s Lake road. The first one to see the lake as we passed Jones Lane would yell, “I see the lake first!” There was often a disagreement as to who saw the lake first and who announced it first.

The lake is a place that brings family and friends together who love the water, the outdoors, fun, and each other. It is my favorite place to be. From the day summer ends and we move back to Albany, we wait for summer to return so we can move back to the lake.