Adam was a son of Jacob Hanes and Eva Warner[1] and was born in Knox on December 27, 1836.[2] He was a brother to Amos and Elias Hanes each of whom served and died in the Civil War. His siblings were: 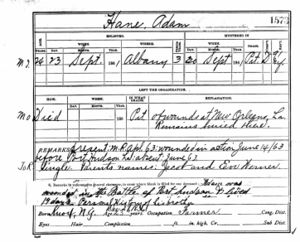 Knox - Adam Matthias Hanes, private, Ninety-first Regiment, Company D; enlisted in August, 1861; mustered in November, 1861; after being in service nearly two years, he was mortally wounded at Port Hudson and died fourteen days afterward, and was buried at New Orleans.