Urias Hallenbeck (Uriah Hallenbeck) (Uria Hollenbeck) was born in Berne on October 30, 1836, a son of John Hallenbeck and Olive Wilday. [1]

Urias was not married. 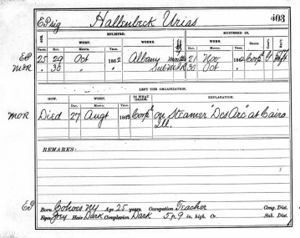 Corporal Uriah Hallenbeck, of the 177th Regiment, was born in Albany County in 1835, and removed to Fulton, Schoharie County, where he enlisted in November, 1862, and died in Cairo of cholera morbus.