According to the Gallup Genealogy. (The Genealogical History of the Gallup Family in the United States, Also, Biographical Sketches of Members of the Family)
JOSEPH GALLUP (John, Joseph, Joseph, Benadam, John, John), son of General John and Hannah (Denison) Gallup; born December 9, 1791; married Lucy A. Fowler, daughter of Benjamin and Lucy Fowler, May 12, 1816; he died May 20, 1870, at their home in Knox, N. Y. Lucy A. Fowler Gallup was born May 11, 1798, and died January 26, 1864. 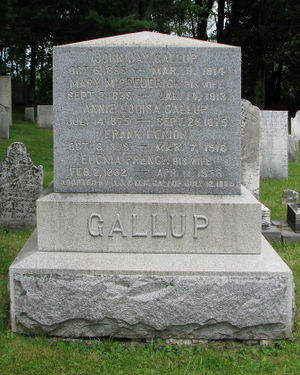 John suffered a fall on February 3, 1914, in which he suffered a compound fracture to his hip that also penetrated his intestines. Medical attention was summoned but his injury was too severe and he subsequently died on March 9, 1914, at his home in Knox. Following a funeral at his home, he was buried in High Point Cemetery in Knox.[3]

From The Altamont Enterprise (Altamont, NY), 1914


Mr. John Jay Gallup, a civil war veteran, died at his home in town of Knox on Monday evening, March 9. (1914) Mr. Gallup's death was caused by a fall on the 3d inst., sustaining a compound fracture of one of his hips, a portion of which penetrated his intestines. Mr. Gallup was given medical attention as soon as a physician could reach him, but on account of his extreme age, and the serious nature of the break, his life slowly ebbed away, and the end came not unexpected. Mr. Gallup enlisted in the 177th regiment, N.Y. volunteers, in 1862 and served nine months in and around Port Hudson, and was in several engagements, being honorably discharged from the service in the fall of 1863. He was an honored member of H.M. Barclay Post, G.A.R. Mr. Gallup was born in 1825, and was in his 89th year. He is survived by two brothers and a sister. The funeral service was held from his late residence on Thursday afternoon. Interment in High Point cemetery. 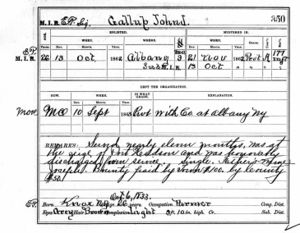 "The Genealogical History of the Gallup Family in the United States, Also, Biographical Sketches of Members of the Family," by John D. Gallup, Agawam, Mass., Press of the Hartford Printing Company, (Elihu Geer's Sons,) Hartford, Conn., 1893, pages 125 and 205.