John married at Albany, NY at about 1871, Clara J. Martineau[1] and had the following known children, born at Albany:

John worked as a law clerk in his father’s office.

John died on November 25, 1895 and was buried with his parents and siblings at the Albany Rural Cemetery in Menands, Albany Co., NY. John's wife, Clara, died on September 27, 1920 and is buried beside him. 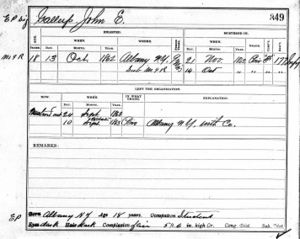