Charles Gage was born in West Berne, NY on August 30, 1928, the son of Harrison and Beulah Clow Gage. His sisters were:

He was a lifelong area resident, graduating from Schoharie Central School.

Charles was employed by General Electric Co. in the maintenance department for many years until his retirement. 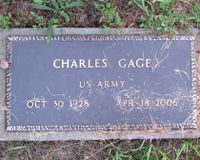 Charles Gage was the son of Harrison Gage Harrison Gage Private funeral services were held Saturday for Harrison Gage, 80, of 373 Michigan Ave., Schenectady, who died Mar. 12, in Ellis hospital following a brief illness. A native of the town of Wright, Mr. Gage lived in West Berne until moving to Schenectady three years ago. He had worked for the Albany Castings Co., before his retirement many years ago. Surviving are his widow, Mrs. Buelah Clow Gage; a son, Charles Gage of Schenectady; four daughters, Mrs. Arthur Martin, Mrs. Ernest Hoberg and Mrs. Frank Heigle, all of Schenectady, and Mrs. Ethel McDermott of Berne; nine grandchildren and 12 greatgrandchildren. The Fredendall Funeral Home in Altamont, was in charge of arrangements.