Joseph Drum was born in Schoharie County, NY in February of 1833. His parents are not known.

He married Mary Garfield at about 1855 and had the following children:

Joseph was a farmer for all of his life.

He was an active member and an officer of the Charles McCulloch Post #645 of the GAR.

His widow, Mary, received her pension from his Civil War service on July 31, 1906. He was buried at the Knox cemetery in Knox, Albany Co., NY. 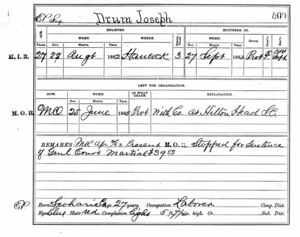