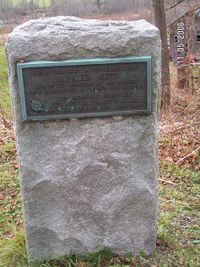 Johannes immigrated with his widowed mother and siblings about 1730. The family first settled in Greene County (created 1800 from Albany and Ulster Counties). Johannes and his family moved to the Switzkill Valley in 1752 and began to farm lot 476 on the 1787 Van Rensselear Survey Map.

Johannes was a farmer.

Children of Joannes and Anna Maria were:

About 1752 the family moved to Beaver Dam, where most of his siblings had previously settled. He homesteaded Lot 476 at the south end of the Switzkill Valley.

Johannes Dietz and his wife Anna Maria were massacred by Indians led by a British soldier on 1 Sept. 1781. Living with them at the time were his son, Capt. William Deitz and his wife and four young children. The family of Capt. Deitz were massacred and scalped before his eyes. Capt. Dietz and two young Brice boys from Rennselaerville who were staying with the family were made prisoners and taken to western New York. Capt. Dietz died shortly thereafter as a prisoner in Fort Niagara. Johannes Dietz was a member of the Committee of Safety during the Revolution.