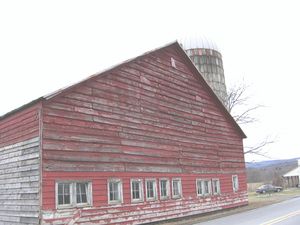 His father, William, had a 229 acre farm in Beaverdam on the Switzkill, and later was a blacksmith in Schoharie, Schoharie, NY, while son Adam W. ran the farm. Johan Jost was one of seven children. The others were Maria Elizabetha, Peter W., William Jr., Lt Col. Johannes, Adam W., and Eva.

Johan Jost resided at Schoharie at different periods of time until he entered the service, and in 1785 removed to Berne where he has lived ever since. [1]

Col. Johan Jost Dietz was a farmer, a storekeeper and businessman. He was confirmed on Aug 8, 1779 at Schoharie Lutheran Church, Schoharie, NY. He served in Capt. Christian Strubrach's Company, 15th Regiment of the Albany Country Militia, at the Old Stone Fort during the Revolutionary War, according to his pension application of Feb. 5, 1834, made at the age of 73. He continued with local military training after the War in the NY State militia, and earned the rank of Colonel. (He was later known around Bernville as Col. Dietz). By 1787 he had married and inherited or purchased the 166 acre farm at Beaverdam, Albany, NY, that his Uncle Adam (brother of William) had homesteaded in 1740 on the Foxenkill between present day Berne and West Berne. (His Uncle Adam had died leaving no living children). His house at 393 Rock Road is currently (2009) owned by Steve and Amy Anderson and sons. In 1812, Col. Johan Jost and partner Jacob Settle opened a store on the Colonel's property. They were very successful at exporting potash to NYC and selling other goods to the local population. The census of 1800 shows he had five slaves. One slave, Jacob (Jack) Deitz, is buried near a monument at nearby Berne and Beaverdam Cemetery, Berne, Albany,NY. In 1835, a bank of yellow clay on his farm was used to make bricks for the new St. Paul's Lutheran Church, Berne, Albany, NY. He invested heavily, with other Bernville citizens, in the Daniel Simmons Axe Factory in 1825. Bernville prospered until 1833 when Simmons moved the factory to Cohoes. Col. Johan Jost and others lost much from that and a second investment in a Bernville Acadamy and female seminary planned to begin building just before the axe factory closed. Col. Dietz was active in public service. He served the community as collector in 1792, assessor in 1795, commissioner of excise in 1803 and 1805, overseer of the poor in 1805, and supervisor in 1797-98, 1812-13, and in 1818.

Johan Jost entered the service on May 1, 1778 as a Private at Schoharie and served under Captain Stubrach in Colonel Vrooman’s regiment. They were headquartered at the lower fort in Schoharie and he was discharged from there.
In the Spring of 1779, at about May, he was ordered into the same company and regiment and served there until November of that same year and was again discharged. He was again ordered into the same regiment and company at Schoharie in the Spring of 1780 until November of the same year, and was again discharged.
He was ordered into service again in the Spring of 1782 in the same company and served again until about September 15, 1782.
Nothing found in his pension records or his payroll records indicate that he served as an officer.[1] His service record indicates that he was a musician, a fifer (see image below)

Johan Jost Dietz married Eva Hilts (daughter of George Hilts and Elisabeth Bellinger of Gallupville, after the War, on Dec. 15, 1783 and moved onto the Beaverdam farm of his deceased Uncle Adam by 1787. They had the following six children:

Col. Johan Jost Dietz died on May 2, 1842[2] at his farm, at Beaverdam, Town of Knox, Albany, NY. It is believed he was buried at Berne and Beaverdam Cemetery, Berne, Albany, NY. No grave marker remains today.

Col. Johan Jost Deitz, his great-grandfather and founder of the family in America, came from Switzerland and was one of the first settlers in the town of Berne, coming there between 1750 and 1760.

Jacob, the grandfather, was born in Berne about 1787. He was a lifelong and successful farmer, accumulating a fine property in the Beaverdam Valley. His wife was Mary Elizabeth Zimmer.

John G , the father, was born in Berne in 1836, his early life being spent on his father's farm. In 1878 he removed to Gloversville, N. Y., where he was engaged in the grocery business for about fifteen years, when he retired to the village of Slingerlands, where he died November 17, 1896, and was buried at Pine Grove Cemetery of Berne. His wife was Lydia J., daughter of John H. Engel, of Berne, and they had eight children : Isadora, Wallace E., Laura, Charles F., Elmer, Seward, Carrie, and Adella, of whom four survive.

Wallace E. was reared on the farm and educated m the common district school. At the age of eighteen he began for himself, continuing his schooling winters. Urged on by his success in his studies, he was soon enabled to secure a certificate to teach. He was then engaged in teaching and studying until 1877, when he passed the State examination and soon after entered the Albany Medical College, from which he was graduated March 3, 1883. He began the practice of his profession in Howe's Cave, Schoharie county, two years later removing to Berne, where he has since resided, enjoying a large and lucrative practice. He owns a farm, also a saw mill, which he superintends. He is a member of the Albany County Medical Society and the I. O. O. F., Orion Lodge No. 624 of Gallupville, of which he is past noble grand. In July, 1889, Dr. Dietz married Theodora, daughter of David and Louis (Rheinhart) Ball, of Berne. They have an adopted daughter.