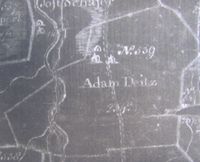 He probably recieved some education in military training. He was also known as Ensign. He began military service in 1782 at Town of Berne, Albany, NY. He lived in 1787 at Switzkill Valley, Beaver Dam (now Berne), Albany, NY. He appeared on the census of 1790 at Renesselaerville, Albany County, NY, in what is now the Town of Berne.

He was a Farmer. His farm was at the northern part of lot no. 539 on the Van Rensselaer Rent Lease Map of 1787. He entered into a rent lease with Albany Patroon Stephen Van Rensselaer lll on 18 Dec 1790 for lot 539 containing 229 acres on Switzkill Road one mile from what became the Village of Berne. Morris Morrow lives on the the farm today near the Switzkill. In 1812, Adam W sold 95 acres of the southern part his farm to his nephew,Johannes Bellinger Dietz. In 1850, Robert Ball bought that 95 acre farm from Johnnes B Dietz. Adam continued to farm the northern part of the lot. Both farms contributed toward the required rent to the Albany Patroon under Adam's 1790 lease. The annual rent was for 22 1/2 bushels of wheat, years later converted to a cash payment. Several rent receipts for lot 539 are held today by the Deitz family. Adam's father, William Dietz Esq., left a will in 1782 that left to his son, Adam W Dietz, the farm at Switzkill Valley on which Adam was already living and working. The farm had been homesteaded by his father, William Dietz Esq. in the early 1740s.

Adam W. Dietz helped build a stockade on his farm during the end of the Revolutionary War to protect Switzkill Valley farmers from the British. It was one of two in the area. The second was in what is now Berne Village. After Adam died, his widow, Margaret at age 81, filed a petition for a military pension for his service in the Rev War. It was denied, however. The Bogardus Farm Burying Ground, with several of the Dietz family graves, is on the northern part of the Adam W Dietz lot no. 539.

Adam was an Ensign in Peter Vrooman’s Regiment, commanded by Capt. William Dietz, of which company Mathias Schultes was Lieutenant. The company was stationed in the fort or stockade in Beaverdam in which fort Adam served from April 2nd to the 15th day of November of 1778. He aided in erecting that fort or stockade, he furnished materials and rendered essential aid in securing the fort and watching the enemy and further had previous service as a piper in another company. A payment record for officers of Colonel Peter Vrooman’s Regiment is found below. It was presented in support of the pension application of Jacobus Dietz.

Adam W Dietz died on 29 Sep 1830 at Town of Berne, Albany County, NY, at age 75, "from old age and injury recieived by a fall from a wagon", according to Johannes Reinhart writing in support of the application for a military pension by Adam's widow, Margart. No record has been found of his gravesite. His widow, Margaret, died on February 1, 1840.