John was a farmer for his entire life.[3]

John was born in Ireland and immigrated to the United States in about 1851.[9] It appears that he married Ellen in the US as she immigrated in 1854 with her brother Patrick Shay and their first child was not born until about 1858.[9] Neither John, Ellen or Ellen's brother Patrick could read or write, which indicates that they got little education during their childhood.[10][11] Records vary on whether John was naturalized or not.
By 1860 John and Ellen had settled in Berne where John owned land and was a farmer.[12] They were to live there for the remainder of their lives. John's property was recorded in the 1866 Beers map as being in lot 463 grid 463.[13] In the 1865 NY State Census, Ellen's brother Patrick was living with the family and was apparently taking over the farming responsibilities since John had been in the army.[10] John continued to farm throughout his life even in 1900 when he was about 70 yrs of age.[9] After John died in 1905, Ellen lived in Berne with her brother Patrick, who still reported his occupation as farmer.[14] By 1915 she was apparently living alone in East Berne at the age of 85 years.[15]

They are sons of John Cummings, who was born in the city of Clonmell, Ireland, in 1829. He was one of four children of Patrick Cummings. John, the father, was a miller in his native place. He came to America and direct to the town of Berne, where he engaged in farming which he continued until recent years, when he retired to the village of Reidsville and leased his farm. In 1864 he enlisted in Co. B, 81st Regiment N. V. Vols., and served until the close of the war, participating in the battle of the Wilderness, where he received a wound and lost part of his hand. He was under General Butler in five active engagements. His wife was Ellen Shea, a native of the city of Clonmell, Ireland, and daughter of Thomas Shea; to them were born five children: James, born June 25, 1857; John, born May 30, 1859; George, born June 1, 1861, and died at the age of nineteen; Ellen, born in October, 1862; and Thomas, born in December, 1866, and died at the age of sixteen.

James and John were reared to farm life and attended the common schools and remained at home until they were twenty-four years of age, when they embarked in business for themselves, their first enterprise being farming and quarrying, which they followed for seven years. They dissolved partnership, James remaining at the quarry and John repaired to Albany and engaged in the stone business from 1891 to 1895. They then moved to Voorheesville and established themselves in the feed, grain and produce business, and in connection with this they carried on an extensive stone business. James married Ella Van Deusen of Berne, and daughter of Robert A. Van Deusen. Their children are Carrie and George. John married Mary C. Ecker of the town of Knox, and daughter of Allen Ecker, by whom three children were born: Thomas, who died when ten years of age; Edward and Mary. John is a member of the Knights of Pythias and of Chancellors Lodge of Albany. The brothers are both stockholders in the Clarksville Telephone line. John is a stockholder in the Altamont Driving Park and Fair Association ; the brothers are also stockholders in the Voorheesville Canning and Preserving Co. 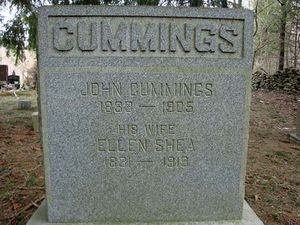 From The Altamont Enterprise (Altamont, NY), 1905


Death has again entered our midst and taken an old resident and veteran of the civil war. John Cummings passed away March 31st. His funeral was held at his late residence, Sunday, April 2nd, Rev. A.D. Lamb officiating. He leaves a wife, two sons, James and John Cummings of Voorheesville, and one daughter, Mrs. James Van Schaack or Dormansville.