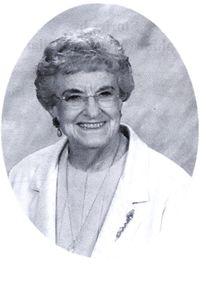 Mother and Dad always said they were glad I was born in 1924, because Millard was born in 1922 so there were 2 years between us. My dads name was Verni Lewis Shultes; he was named after his uncle. Mother was Marie Ball Barber. I believe they were both born in the town of Berne.

B-When I was a child on the farm we never lacked for something to do, we had a garden to take care of and other farm chores like haying. Millard and I had a place we called the Arch, down in the woods where we played. We even fenced it off so the cows couldn’t get in. There was sap time in the spring and on rainy days we could clean the shop. My brother Keith was forever making things to try out on me. Mother found me one day with a pair of wooden wings up over the wood house and I was going to jump out the window to see if they worked, but then he decided the smoke house would be better because it was lower. Another day he built a boat out of big planks, but we never got that on the creek, they found the boat before we could use it. When we were real little, my Dad was down in the field working and he heard all the windows in the chicken house go crash, crash, crash, and he came running up and wanted to know what us kids were doing. We told him we were just letting the chickens out. We never got spanked, we got warned the first time, and so we never did the same thing twice.

K-I was born while my parents lived on a tenant farm, which was less than a half-mile from my grandmother’s place. At about an age of 2 or 21/2, which is the earliest I can remember at that house, which was owned by John Weidman and his wife, there was an outside cellar stairway made out of stone and I climbed up that stairway to get a hammer that was on the top step, so I could use it. As a toy, the thing I remember most was a broomstick with a small gear tied on the end and when I rolled it in the dirt of the driveway or the road, it left such wonderful little tracks for me, I was fascinated by that. I went to Schoharie for my high school education. B-I might mention that Keith was 10 years old when they took him to Berne to take the regents, and he passed them. He graduated at 14 and was valedictorian of his class. Millard was salutatorian and I came in third. I guess I was the dumb one of the family.

K-I don’t remember much about the early years on the farm, other than it was a fine place to grow up and we had a well outside which is still there today. We had a cistern in the basement of the house with a pump right above it, which had a crank to pump the water. The well outside had a chain with a bucket, which you lowered and raised to bring water up, which we carried into the house for drinking and cooking, every day. Near the well was a wood house where we carried wood in every day for the kitchen and living room stoves. The living room stove had a stovepipe that went thru the floor and up thru the bedroom where my brother and I slept all the time we lived there. The privy was in back of the wood house so it was quite a trip out there every day.

B-One day I was running down around the wood house to go to the privy and I didn’t know Keith was inside. When I went to open the door, he slammed it shut and ripped my eyebrow open. Mother heated all her water in a big copper boiler to do the washing. She did all her washing on a scrub board by hand. She never had a washing machine until we had electric put in the house in 1935, right after Keith graduated from school. K-I graduated from college as an electrical engineer and my first job was to put wiring in our house. Rural electrification had ended right at the farm at that particular time. B-My grandmother had carbide lights. Her house was an old sanitarium and it was great to have lights in all the rooms. Her name was Minnie (Becker) Shultes. Austin Shultes’s wife. He was a taxidermist and you have some of his bird mounts here at the museum. I have one duck mount at my home in Florida and my sister has the Golden Eagle at her home in East Berne. He was a great conservationist.

K-We raised oats, corn buckwheat and hay. B-I used to drive the hayfork at times. I hated that; I didn’t like horses and never liked cows. I refused to learn how to milk; I had two older brothers to do that. I carried the milk, pitched the hay, fed the cows and even cleaned up after them. K-I didn’t mind the horses but I didn’t want anything to do with the cows either. B-We sold eggs at the store; of course everything was sold in bulk, coffee, flour and sugar. We had a pantry where everything was kept in barrels and coffee was kept in a milk can. There was a coffee grinder hanging on the wall. Butchering and canning were big things, no freezers back then. We grew a lot of fruit on the farm and my mother would buy pineapples and peaches. We would can all summer, things from the garden, pork and beef. K-We used to cut ice on the Fox Creek in what we called “The White Water”, and carried it home on wagons and put it in the icehouse with saw dust for insulation. It would keep all summer and we would use it to keep the milk cool. We had cabbages and apples and made cider and kept it in what we called the root cellar.

B-My father used to deliver mail by horse and sleigh in the wintertime. When Millard and I were growing up and I was going with Ken, many times we skied the mail up on the hill. The mail must go thru and in those days they didn’t have plows to clear the roads like they do today. The post office was in Barber Schoonmaker’s store in West Berne.

K-I have been sitting here in my living room marveling at the fact that I saw men walk on the moon. I myself worked on radar in the laboratories at Fort Monmouth New Jersey. The first radar I was responsible for installing was a fixed radar site on either end of the Panama Canal.

B-Our class trip was to New York and I saw television and I couldn’t believe it. Mrs. Scrafford was our class advisor and she took us to Jack Dempsey’s restaurant. We got to meet Jack and he even shook my hand. What a thrill that was for me

K-I walked to school every day. Some of my schoolmates were Hamen Shultes, Charles Shultes who was no relation, George Sisson, Carrie Sisson, Robert Reed and Wallace Becker, who lived up on Dutch Hill.

B-I remember dipping water from the spring outside the schoolhouse and taking the pail inside. All the students drank from the same cup. We also had to carry wood in for the stove and carry the ashes out. Our teacher was Mrs. Becker and one day her son Ralph accidentally hit me in the head with the stove poker. He got punished severely and I felt bad for him because I wasn’t really hurt. Many noon times we would eat our lunch down in the woods. The teacher would ring the bell when it was time to come back. We were late a lot, because we didn’t seem to hear that bell. My school mates were Harold Schoonmaker, Ernie Ecker, Wallace Mattice, Millard Shultes, the McFarland children and the Hoose family and Everett Schoonmaker.