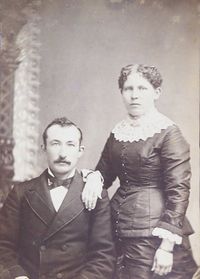 Edgar was born on February 24, 1858, in Rensselaerville to Joseph C. Bouton and Jennette Smith. According to his granddaughter, Doris Boughton Palmer, he always went by the nickname "Harry".

Edgar was a farmer and contractor.

On February 24, 1858, Edgar married Rossetta Tallman[1], a daughter of Jonathan Tallman and Caroline Bouton. Through the Bouton family, he was also a cousin (twice removed) to Caroline Bouton, Rossetta's mother. Edgar and Rossetta had two children, Lura May Bouton and Manley J. Boughton. Lura May died at two months of age in 1885.