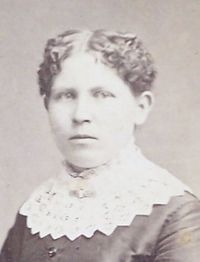 Rossetta E. Tallman was born July 03, 1860, in Huntersland a hamlet of Berne[1]. She was the last child of twelve born to Jonathan Tallman and Caroline Bouton. In various sources, her name has been transcribed as Rossete, Rosetta, and Roze. She always went by the nickname "Etta".[2]

On February 24, 1858, Rossetta married Edgar Harry Bouton[3], a son of Joseph C. Bouton and Jennette Smith. Edgar was was also a cousin (twice removed) to Caroline Bouton, Rossetta's mother. In 1900, they were living in Westerlo and by 1910 had moved to Rensselaerville where they lived the remainder of their life. They had two children, Lura May Bouton and Manley J. Boughton

MRS. HARRY E. BOUTON - Mrs. Rosette Tallman Bouton, 82, wife of Harry Edgar Bouton, died yesterday at her home in Rensselaerville after a long illness. Mrs. Bouton was born in the town of Berne and had lived in Rensselaerville for about 60 years. Besides her husband she is survived by a son, Manley Bouton, three grandchildren, and one great grandchild. The Funeral will be Wednesday at 2 p.m. at the home. The Rev. Donald Boice of Westerlo Reformed Church will officiate. Burial will be in Rensselaerville Cemetery under the direction on Peter Applebee, Delmar funeral director.