Frank Beretz was born November 9, 1921, the son of John and Bessie Beretz of Schoharie Turnpike, Duanesburgh. His siblings were:

Frank Beretz was a carpenter and employed in Albany in 1947. 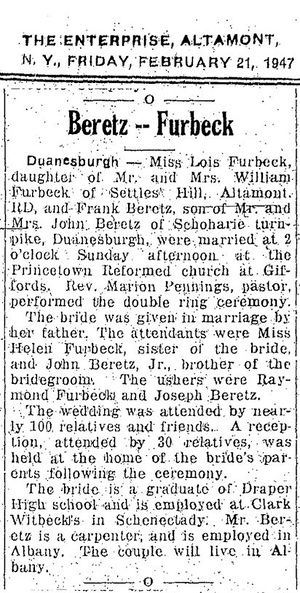 The bride was given in marriage by her father. The attendants were Miss Helen Furbeck, sister of the bride, and John Beretz, Jr., brother of the bridegroom. The ushers were Raymond Furbeck and Joseph Beretz.

The wedding was attended by nearly 100 relatives and friends. A reception, attended by 30 relatives, was held at the home of the bride's parents following the ceremony.

The bride is a graduate of Draper High school and is employed at Clark Witbeck's in Schenectady. Mr. Beretz is a carpenter and employed in Albany. The couple will live in Albany.

GUILDERLAND — Gerald E. Furbeck, 80, died Wednesday, May 15, 2002 at St. Clare's hospital in Albany following a long illness. He graduated from the former Draper High School in Rotterdam. Mr. Furbeck retired from Voorheesville High School as a custodian and from the state's Health Department Griffan Laboratory in Guilderland.

His wife, Marie, and his brother, Donald died before him. Funeral services will be held Sunday at 3 p.m. at the Helderberg Reformed Church in Guilderland Center. Friends may call at the church on Sunday from 2 to 3 p.m. Burial will be in Prospect Hill Cemetery in Guilderland.

Memorial contributions may be made to the Helderberg Reformed Church, Route 146, Guilderland Center, NY 12085.

Arrangements are by Fredendall Funeral Home in Altamont.

Given in marriage by her father, the bride was attended by Miss Ann Marie Storey; maid of honor, Mrs. Donna Snag and Miss Michelle Merenherg, bridesmaids. Joseph E. Storey served as best man, and guests were seated by John T. Snag and Leonard P. Beretz.

A reception was held at the Pelmer House, Guilderland, after which the couple left on a wedding trip to Florida.

Mr. and Mrs. Storey are alumni of Duanesburgh Central High school. The bride, also a graduate of Mildred Elley Secretarial school, is employed by A. J. Eckert Co., Inc.

The bridegroom is a candidate for graduation in June from Hudson Valley Community College in Troy.

Cited By State For Heroism

The New York State Thruway Authority Monday presented an award of heroism to Frank Beretz of Delanson, an employee of Price - Chopper supermarkets, for saving the life of a man trapped in a burning vehicle on the Thruway near Amsterdam on July 28.

An engraved plaque was presented to Beretz by Joseph E. Pauquette, Thruway operations director, and Major Roswell M. Wolfe, commander of State Police Troop T, at a luncheon in Colonie on behalf of chairman Gerald Cummins and members of the Thruway Board.

The Thruway Board, in its authorization of the award, described the incident this way: "On July 28, 1978 at 4:20 a. m., Frank,Beretz, R. D. 2, Box 216B, Delanson, N. Y., an employee of Price Chopper supermarkets, witnessesed a tractor trailer accident at milepost 171.6 eastbound. Mr. Beretz, who was parked at the Mohawk Service Area at milepost 172 eastbound, observed the tractor trailer, which was operated by Richard Raux, 427 Bellinger St., Mohawk, N. Y., leave the Thruway, run off the right shoulder of the road, overturn and burst into flames.

"Without regard for his personal safety, and caring for the safety of the occupants of the vehicle involved in the accident, Mr. Beretz ran from his vehicle with a fire extinguisher to attempt rescue. By removing some of the wreckage and using his fire extinguisher Mr. Beretz was able to remove a passenger in the tractor-trailer.

A letter from Major F. D. Thumhart, then commander of State Police Troop T said "Your heroic actions at a scene of a tractor trailer accident on July 28, 1978 have come to my attention. A review of the report submitted by Troopers J. M. Pradelski and G. E. Lawrence, disclosed that the vehicle involved burst into flames. Without regard for your own safety, you removed some of the wreckage and through the use of your fire extinguisher did extricate and save the life of one of the occupants. Due to the intense heat and flames, another attempt to rescue the second occupant was made impossible.

"Your assessment and quick reaction to this situation, exposing yourself to such critical danger, saved one person from impending death. This is one very fine exhibition of true courage and valor, which is not often displayed. I am very sure the Raux family deeply appreciate your timely and life-saving assistance.

"On behalf of the members of the New York State Police, I wish to express our commendation and admiration for your heroic efforts at the scene pf this accident."

Beretz has also received an award from Price Chopper supermarkets in recognition of his heroic action.

Mrs. Tessie Beretz, wife of John Beretz, died suddenly Monday (September 1, 1952) afternoon at her Schoharie Turnpike home near Duanesburgh. A resident of the area for more than 20 years, Mrs. Berets and her husband moved to their home here from the Town of Knox six years ago. She was 61. Mrs. Beretz was born in Hungary, Nov. 2, 1890, daughter of Frank and Esther Sabona.

Margaret ("Mimi") Beretz of Albany, formerly of West Berne, and Stephen Harris of Albany announced their engagement recently. An Aug. 18 wedding is planned. Miss Beretz, the daughter of John Beretz, Sr., of East Berne, is employed as an administrative assistant by H.D. Roberts Real Estate. Her fiance, the son of Albie and Delores Harris of Cobleskill, is an account representative with

Accident Kills logger in Middleburgh By David Avitubile A falling tree limb apparently killed a West Berne logger while he was cutting trees off at Brooky Hollow Road in Middleburgh Wednesday. John Beretz Jr., 71 was pronounced dead near the site by county coroner Joseph Spink, said Undersheriff John Bates of the Schoharie County Sheriff Department. Mr. Beretz was cutting trees about two miles off of Brooky Hollow Road at about 3pm with Clarence Furman Jr., also of West Berne, Undersheriff Bates said. Mr. Furman discovered the accident after his chainsaw ran out of gas, police said. Mr. Furman did not see Mr. Beretz or hear his chainsaw and went to the tree which Mr. Beretz had been cutting, police said. Undersheriff Bates said Mr. Furman found Mr. Beretz facedown with a large, dead tree limb next to him. The limb apparently fell off a nearby tree while Mr. Beretz was cutting and hit him in the head, police said. After discovering the accident, Mr. Furman went down the road to a house and called for help. The Middleburgh and Huntersland fire departments and MEVAC responded along with Deputy Duane Tillapaugh, police said. Mr. Beretz was administered first aid and brought out to the road where he was pronounced dead, police said. "There's nothing to show that its nothing but an accidental death, a tragic one," Undersheriff Bates said.

JOHN BERETZ WEST BERNE - When a logging accident killed John Beretz last month, he fell prey to the hazardous occupation that claimed his son 17 years ago. Beretz, who was 71, died Jan. 25, (1995) after a tree limb fell on him off Brooky Hollow, in Middleburgh. "He loved the outdoors," said his daughter, Mimi Beretz Moran. "He had an extreme zest for life." He was proud that at 71 he was able to work outside and "was in better shape than a lot of people in their 40's," as his daughter put it. Mr. Beretz was born in Blaire, W. Va., on Jan 2, 1924, son of the late John and Tessie Sobona Beretz. He was raised in Delanson, where he graduated from high school. For the past 23 years, he had lived in West Berne. He was proprietor of the Beaver Dam Hotel in West Berne from 1972 to 1989 and had been a self-employed logger for 20 years. During World War II, he served with Army Air Corps. Survivors include his daughter; two brothers, Frank Beretz Sr. of Delanson and Joseph Beretz of Middleburgh; and a granddaughter, Kasey Paige Moran. Two sisters, Margaret Dykeman and Julia Agnew, are deceased. A service was held Jan. 28 at the White-Van Buren Funeral Home in Delanson. Memorial contributions may be made to the Middleburgh Volunteer Ambulance Corps.