KNOX - The Remains of Jennie Bell, who died in Alton, Ill., were brought to the Knox cemetery for burial on Monday afternoon 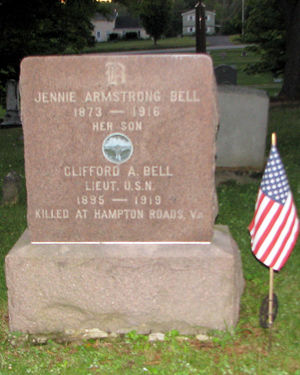 The funeral of Clifford A. Bell, who lost his life off Newport News in February while piloting a giant hydroplane with several officers of the naval training station at that place, was held at Knox cemetery on Tuesday afternoon. Members of Noah Lodge No. 754. F. and A. M.. of Altamont, attended and held Masonic services at the grave.

The accident in which Lieut. Bell lost his life occurred during a heavy storm. The seaplane became unmanageable and plunged into the ocean with all hands aboard. It was believed at the time of the accident that all of the crew had been carried down with the machine, but it appears that Lient. Bell bad unfastened himself when going down, thereby making it possible to get away from the sinking plane.

Several days ago his body was washed ashore and identified by a ring bearing bis initials and by the name on his clothing. The remains were shipped to Altamont in a metallic casket. Lieut. Bell had been in the service about four years and had expected to come home on furlough shortly after the date of his death. He was about 24 years old and is survived by his father, Theodore Bell, and his brother, DeWitt Bell.

Theodore Bell of Township was painfully injured Tuesday when a load of hay on which he was riding upset. Mr. Bell was thrown off, striking his face on one of the wheels. His jaw was broken and his face severely cut. His hired man. who was riding with him, escaped injury.

Dr. Cullen of Altamont attended him.

—Justice Cheater has denied the application for alimony and counsel fees made by Mrs. Jennie A. Bell of Knox who is suing for a divorce from her husband, Theodore Bell. He did so on the ground that the testimony showed collusion on the part of the wife in setting the evidence against her husband. He holds that the woman named as corespondent went to the home of Bell through the connivance of the wife. Justice Chester, however, makes the decision without prejudice to divorce action.

Last Thursday as DeWitt, eldest son of Theodore Bell, of the town of Knox, aged about 12 years, was attempting to shoot some sparrows from a window of the house, the gun accidentally discharged, the bullet striking him directly in the ear, causing a serious, though it is now thought, not a necessarily dangerous wound. Dr. Fred Crounse was summoned and the lad was made as comfortable as possible, but it was not until Wednesday of this week that any portion of the bullet was removed. Evidently the bullet split on striking the hard bone and it is thought the other portion has lodged in the inner ear. He is now improving but has lost the power of speech.