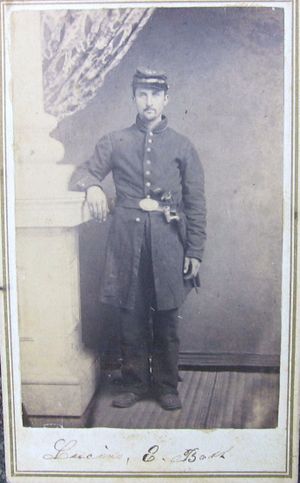 Lucius E. Ball in the Civil War <br.>Copy from the collection of Allan Deitz. The original tintype is now owned in 2010 by Susan Dewitt Pyne. The photographer was apparently his brother Jerome Deitz Ball who was a professional photographer.

Before he served in the Civil War, Lucius worked as a carpenter.[1]

Lucius died on June 6, 1862 at Cold Harbor, Virginia. He had been wounded in the thigh three days before and had laid in shallow pits with William A. Post and Daniel McCollock (of New Scotland) without the availability of shelter, food or water under the blazing June sun. By day they were pinned to their protected pit by Confederate fire and every night they attempted to move closer to the safety of the Union lines. Only Daniel McCollock survived long enough to reach safety.[1]

This story was remembered in the Ball family and was told to Allan Deitz by Clyde L. Ball: Lucius and William A. Post fought side by side during the battle. After both were wounded they tried to get back to their lines by crawling at night under cover of darkness, but didn't make it. They were found together on the battlefield. [5]

Lucius's parents Robert Ball and Anna Barbara Dietz never saw all of their children together because Lucius died before he could see their last child, his sister Cora Ball.[5]

Knickerbocker News dispatch from the field June 8, 1864 reports death of Lucius E. Ball and William A. Post, both of Berne.

Keating, Robert, Carnival of Blood: The Civil War Ordeal of the Seventh New York Heavy Artillery, Published by Butternut and Blue, Baltimore, Md 1998 Born: Albany [should be Berne], NY. Age 19. Occupation: carpenter. Enlisted, August 1, 1862, as private in Co. D; wounded in the thigh by a shell fragment, June 3, 1864 at Cold Harbor; lay between the lines without treatment, food, or water, until June 6, when he died.

Clark, Rufus Wheelwright, "Heroes of Albany; A memorial of the Patriot-martyrs of the City and County", 1867 LUCIUS E. BALL enlisted August 6, 1862, in the One Hundred and Thirteenth Regiment. Killed in battle at Cold Harbor.

Formal name: Complete Record Relating to Officers, Soldiers, and Seamen Composing the Quotas of Troops Furnished to the United States..in the War of the Rebellion The registers provide military service data and personal biographical information regarding the men furnished by each town or city during the Civil War.