Permelia died on October 3, 1912, and is buried in the Knox Cemetery in Knox. 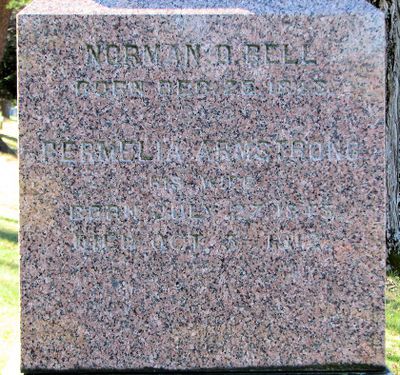 The funeral was held Sunday at 11 a. m. from the home of her daughter, Mrs. G. H. Williamson, 12 Mynderse street, Schenectady. Interment at Knox.

—Justice Cheater has denied the application for alimony and counsel fees made by Mrs. Jennie A. Bell of Knox who is suing for a divorce from her husband, Theodore Bell. He did so on the ground that the testimony showed collusion on the part of the wife in setting the evidence against her husband. He holds that the woman named as corespondent went to the home of Bell through the connivance of the wife. Justice Chester, however, makes the decision without prejudice to divorce action.

—Norman Bell, of West Township, gives the following record of his 13 cows from May 1st '88 to May 1st '89: Whole number of pounds of butter 2,828, bringing Mm $607.09, or an average of 217 1/2 pounds per cow, being an average income from each cow of $46.70, besides the calves. His stock are grade Jerseys. Mr. Bell considers that his cows pay him well, not to mention the benefit derived from feeding his hay and grain at home.

Altamont Enterprise, Altamont, NY, Friday, February 2, 1917 Death notice
Norman Bell, a highly respected citizen of the town of Knox, died at the home of his daughter, Mrs. George Williamson, of 12 Mynderse street, Schenectady. Mr. Bell served as assessor and justice of the peace for several terms. The funeral was held on Monday, Jan. 29, 15 10 o’clock, at the home of his daughter, Rev. G.S. Hamilton of Knox officiating.