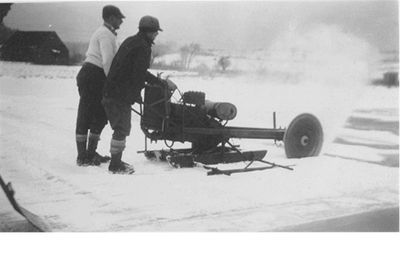 Ice harvesting on Thompson's and Warner's Lake, Foxenkill Creek and various other places flourished during years when nearly every place of business, farm, or residence had an ice storage place of some sort. The ice fields were laid out with a horse-drawn marking plow, the cakes usually 18 inches by 22 inches being sawed or barred off, and the product was horse-drawn to its destination.

There was a field at the Bins' Grove on the south end of Warner's Lake, and another at the north end adjacent to the then Dick Mattice place (now Zwicklbauer's) and the Warner-Strevell places. At the latter place, Dick Mattice was thrown from the plow he was riding, hitting his head, resulting in his death in a few hours. On the south end, George Pitcher turned around over 60 feet of water; and on the light snow being cleaned off it was found two wheels of his car had been about two feet on less than an inch of ice from the day before's opening. The late Floyd Gibbs had stepped out on snow-covered thin ice, gone through and luckily popped back up through the hole. If he had missed, the ice was thick enough to have held him down. Some one asked him why he did not bring the ice bar he had in his hands back up! It was quite a cold, day but he bundled up and was taken home in a sleigh.

Finally, power saws (usually Model T Ford frames and engines) were made up an superseded the hand sawing.

There was a channel a little wider than the cakes, cut from the field to a convenient distance from the Bins' ice house, and a wooden chute with the lake end under water, so the cakes were floated into it. A rope with a hook in the end was dropped over the end of the last cake, and up to 20 cakes were pulled up to the ice house about 150 feet from the lake. I furnished the motive power for this filling by the late John Stannard with my young dark iron gray horse "Smoky." The horse required no driver as he went back and forth with no guidance. He was real'dark gray with white face, mane and tail, and white hind legs. He is now all white, 25 years old, has had 149 different horses hitched with him, loaned to one after another. The late Harvey Van Schoick had him a year and a half. I just got him back from George Zeh after a year and a half loan, and before picking him up Eldon Quay called and has the loan of him at present. He is still at and capable of a good day's work. He was also the carriage horse for the kids who were too small for the ponies at the New York Telephone Company field day in Albany. It was discovered on the morning of the event that Bob Goetz's mare had cut her leg so she should not be used, so I had to borrow my own horse. (I trust I may be forgiven for the horse mixed in with the ice, but he is truly a great horse. I have owned him 20 years, the longest I ever owned one horse, and he will be buried and not go through the grinder).

Before the innovation of artificial refrigeration, frozen ice was a great industry. THe Hudson River was lined with large ice houses. The Alex house and pond were just north of Western Ave. and west of Manning Blvd. Warren Bros.' house and pond were on the south side of Western Ave., with no buildings until the large Jacobie dairy farm at New Scotland Ave. with its row of large stately pines-along the road.(There was no South-Manning Blvd. at that time.)

The late Ernie Hein of McKownville was for many years the representative of the Hygienic Ice Co.