From Berne, NY - a Helderberg Hilltown
Family Day at O'Hanlon's
Jump to navigation Jump to search 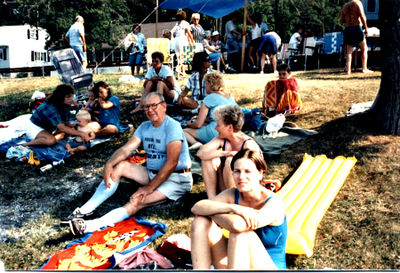 Dave O'Hanlon in the middle of everything

Warner Lake Improvement Association Family Day picnic's were a tradition that was started in the 1940s. In the early years they were held at Pitt's camp on the lake or at Hayden's tavern on Warner-Hayden Lane. It quickly became the social highlight of the summer season. There were all sorts of games for the children both in and out of the water and pony rides. There was a wacky hat and most beautiful baby contests for the adults and a greased flag pole where children would try to climb to the top to get the money placed there. Hayden's tavern burned down and the picnic's were discontinued for many years. Eventually they started up again and were held at O'Hanlon's Grove on the south end and the Osterhout's on the east shore of the lake. After a few more years their popularity waned and they were discontinued. All the photo's in this section are from Bernie Nagengast's collection and were posted by Willard Osterhout and are a compilation from several different years.