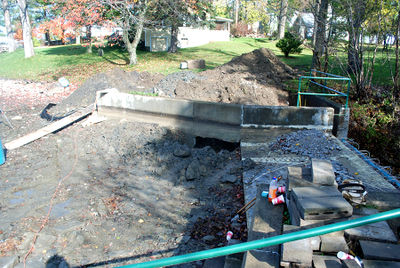 The dam at the start of reconstruction

Hurricane Irene struck Warner Lake in August of 2011 dumping over 13 inches of rain and causing a beaver dam on a stream on the north end of the lake to fail resulting in thousands of additional gallons of water to flood into the lake. All of this caused a rapid rise in the lake level to height never seen before. At one point over 2ft of water was going over the entire top of the dam. After the water level went down, an engineering study was done to determine the extent of the damage to the existing dam. A contractor was hired to make the necessary repairs as suggested by the engineer's report. The cost of the repairs was nearly $30,000. All dam repair photo's were taken by Lee Jones