From Berne, NY - a Helderberg Hilltown
Cyclone
Jump to navigation Jump to search 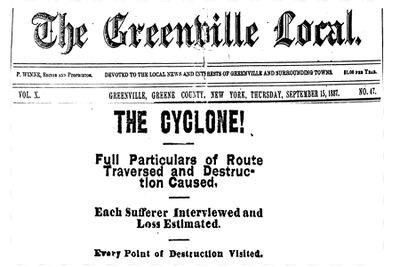 A story in the Greenville Local in 1887

As we stated last week the cyclone of the 7th was the most destructive that ever visited this part of the country. In order to give our readers a detailed and correct account of the ravages we have spent several days in traveling over its line of march, visiting the wrecks and interviewing the suffers. We never so fully realized the feebleness of our descriptive powers as when we attempted to guide our pencil through this description and to picture the sights we saw and chronicle the tales we listened to.

The first point we visited was the home of Philip Ensminger, six miles west of Rensselaerville. Here the cyclone seemed to first strike in full force in its rebound from Fultonham. Mr. E’s large barn 90x40 feet, filled with hay and grain, was completely swept from its foundation and blown away, nothing but the sills remaining. Four horses were in the stable and they miraculously escaped injury. A platform wagon, top buggy, an open buggy, feed mill, power and cleaner, sulky plow and drill were completely destroyed. He also had a hay barn 24x30 entirely demolished. The hay, grain and other contents were all scattered. The hog pen was lifted from its foundation and somewhat wrecked. The house escaped with but small injury. One orchard was completely destroyed as well as other trees. The heaviest timbers of the barn were carried across a five-acre field and others a half and some a full mile. A number of hens were killed and a favorite dog carried a distance and injured. A number of people were at work in the hop yard and started for the house. Three of them reached there but the rest were cut off by the line of the storm. Mr. E’s loss is not less than $2,000.

One-quarter of a mile east lies Peter Becker. His barn 40x30 feet was filled with hay and was blown away and scattered by the force of the tempest. Of two large orchards but a few trees remain. One corner of his woods was prostrated. Fifteen rods north Mr. Becker owns another set of barn buildings. Here a large wagon house was completely leveled, part of the roof was taken from the barn, the house considerable damaged and furniture destroyed. A spring wagon and a buggy wagon were smashed. His loss is not less than $1,000.

Calvin Bushnell, a few rods further northeast, had five acres of heavy timber of which but fifteen trees remain. Three chimneys were taken from the house, fences prostrated and other damage done. He estimates his loss at $500.

George Turner’s barn, on the place occupied by John Reinhart, was damaged to the extent of about $50. The house was moved and trees prostrated.

Josiah Utter lost twenty acres of wood, fences and crops. Five hundred cords of timber are prostrated and he estimates his loss at $1,000.

Hiram Tubbs was a severe sufferer. He lives just below a steep hill and the storm seems to have struck his premises with increased force. Barns, two sheds and a hog pen were leveled and nearly all blown away. A huge slippery elm tree, three feet through, standing in the yard, was plucked up by the roots as if it had been a weed, stone walls were blown over and everything smashed terribly. Four orchards, with the exception of scattering trees, were destroyed. Two fields of corn are flat on the ground and much of it blown away. The buckwheat field is as level as if a land-roller had passed over it. Mr. Tubbs, who saw the storm coming, says it looked like a huge sheet of snow rolling over and over like a monster ball. He stepped in the house and told the family to go down in the cellar, as he believed a cyclone was coming. The daughter stepped to the cellar door but he stopped her saying it was no need as it was all over. The barn, trees and all the wreck were made in as it were a second of time. The escape of the house seems almost miraculous. Huge trees had fallen all about it, barely missing the building on four sides. Truly an unseen hand must have saved this family from death.

At Fred S. Tubbs, one-quarter mile east, a wagon house was leveled to the ground, also part of the of the shed, barn and the building badly wrecked. Fifteen acres of buckwheat and four acres of barley and oats were destroyed. A platform spring wagon was smashed. With a few exceptions the trees in his orchard were torn up. Mr. Tubbs had two horses in the pasture and one of them he told us Saturday afternoon had not yet been found. It may still be wandering in the woods where it had gone in its fright or possibly lying somewhere dead. The damages here is not less than $500.

At David Wright’s, on the Abram Wood farm, the barn was entirely demolished and contents scattered. Of three orchards only twelve trees remain. A vacant house on the same farm was blown away. A market wagon, lumber sleigh and cutter were wrecked. Damage about $500.

Morgan Wright lost a shed, the shingles stripped from part of the roof of his barn and orchard ruined. Estimates his loss at $300.

The next point where the rolling tempest struck with its most destructive force was at the residence of Albert Gifford, on the road between Rensselaerville and Berne, west of South Berne. Here we found a most pitiable sight. Everything in the monsters line of travel was but a twisted, ruined wreck. House, barn, orchard, everything gone and strawn in the cycle’s line of destruction. A few hens and turkeys, a solitary pigeon trying to drink from a shattered piece bit of crockery, and the childrens cat sitting on a pile of stone was all there was left to tell that it was once a happy home. The youngest child had its hip broken and smashed. At this writing, Saturday afternoon, it was thought it could not possibly recover. A boy of about eight years was badly cut but it is thought that he has received no serious injury. The oldest boy and the baby escaped with a few slight hurts. Most of the contents of the barn were blown away, mowing machine smashed, a large field of buckwheat ruined and much other damage done. The contents of the house were all destroyed. His loss cannot be less than $1,000.

Three-quarters of a mile north, east of South Berne, on the George Filkins Sr. place, occupied by Charles Hemsted, fearful damage was done. A new home was in process of erection, but the family were still in the old house. The upper story was blown off and the house complete destroyed. When the family found the house was being torn into fragments they took refuge in the cellar. Excepting a young man by the name of George Taylor. He was hit by a piece of the door and wandered out in the storm in a dazed condition. However he was only badly bruised head and was not seriously hurt. The sheds were blown down, the barn wrecked, but the new home escaped. Over one hundred cords of timber was blown down. Loss, $1,000.

On the Thomas Vincent farm, occupied by Edgar Barber, the kitchen and wood house were wrecked, house badly shaken up, roof taken off the main barn and a small barn destroyed. Half of their wood lot was destroyed. Loss, $1,000.

The Francis Brate place lost part of the roof of the barn and had a top carriage smashed. Loss $200.

Lewis Filkins had a wood house and kitchen demolished and roofs taken from the main house and barn. Orchard was destroyed and timber lot seriously wrecked, furniture destroyed and top wagon broken. An apple tree had been pulled up, carried through the air and carefully set down in the midst of a meadow with the roots pointing directly up. A monster pine tree, nearly four feet through, standing in the front yard, and all the sheds and the apple tree were torn up and tossed about. Loss, $1,000.

George W, Filkins premises received a severe shock. The cupola and part of the roof was taken from the large new barn, roof off one shed and of the small barn. The two-story blacksmith and carpenter shop was cut in two, the lower part being smashed and the upper part settling on the ground. The end was blown out of his hay barn. The house had a general shaking up. Twelve acres of timber were destroyed on this farm. One orchard prostrated and another badly damaged. Loss not less than $2,000.

Fred W. Conger had a lot of apple trees destroyed and valuable lot of timber. Loss, $1,000.

In Reidsville the Methodist church lost a roof. The blacksmith shop of W. J. Conger was unroofed. The barn of Mrs. Abram Whitbeck lost a roof. Mrs. A. R. Hungerford lost part of the roof of her house and some timber. Elias Young had an orchard partly uprooted. The Christian church lost a chimney and the sheds were leveled. John Townsend lost a few trees and some fences. This village escaped the full force of the tornado as it went just north of the main street. A few rods father south and the village would have been swept away. The loss here will foot up probably about $1,000.

Manly Conger lost the roof of his barn and wood house. Damaged orchard and a lot of forest trees. Loss, $500.

Hiram Weidman lost the roof of his woodhouse and kitchen also the shed roof, corn house and orchard. Here for the first time the cyclone deviated from easterly course and went south a short distance and then to the southwest as if to look back at the destruction it had left in its track. Mr. Weidman’s loss is $500.

Note: The article goes on about the damage that was caused below the hill in Onesquethaw and Tarrytown. I have retold the article as it pertained only to the hamlets of the town of Berne.