Visit Cemeteries for a listing of all know cemeteries in the Hilltowns. 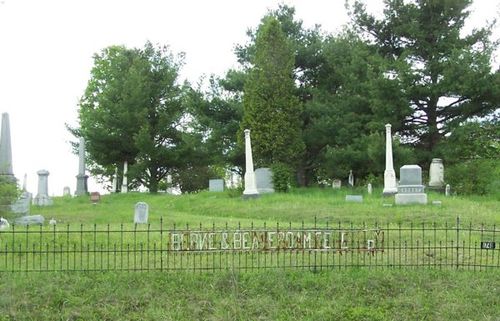 To genealogists, cemeteries contain some of the most valuable and personal information available about ancestors. Unfortunately the earliest burial places of Beaver Dam settlers will never be known. The early settlers were farmers; family members were buried in a family burying ground set aside on the farm where they lived and died. This was for practical reasons: bodies were not easy to transport, funerals were performed by family members with burials taking place the same day as the death or the next, and families wanted their departed loved ones to be close at hand so that the grave site could be easily visited.

Knolls were favored for family burial grounds if available. The graves were marked with simple field stones. Sometimes the family scratched the person’s initials into the stone and maybe a date.

It was many decades before formal community cemeteries were established that served as burial grounds for multiple families. After community cemeteries were established many family burial grounds were no longer used. A generation or two later the burial grounds were no longer cared for. Abandoned, the grounds became overgrown with brush and trees. Stones fell over or were broken by fallen limbs and became covered with leaves. In a few years they became lost, perhaps forever.

At Albany County Hall of Records, Book 20 (on aperture cards in vault)