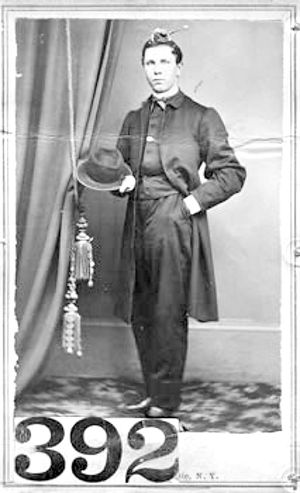 The story of Civil War soldiers from Berne and the War's impact on the community is told in the book, Our Heritage, the history of the town of Berne. In a section titled, "Berne Serves In the Civil War", Euretha Wolford Stapleton, historian for the town of Berne, writes the following:

According to the records the town of Berne had as least 77[1] men who volunteered in the War Between the States. Many of them were just farm boys, who, caught up in the wave of enthusiasm, had enlisted to save the union and to end slavery. The first enlistments were for only three months. It was three years before many who survived battles, swamps, Libby or Andersonville, returned to Berne. Some had lost an arm or leg; others had their health broken by disease. Very few Berne men saw action in the early campaigns. The majority fought in Louisiana and in the final battles near Richmond.

We have recorded a few stories of those who died:

Joel Wilson, born in Berne in 1842, joined the 177th New York Regiment in 1862 and was sent to Louisiana, he died there of typhus fever and his body returned to Berne. Among those who mourned was his fiance, Ann West. Joel was buried in the Methodist Cemetery on West Mountain, a location which adjoined the Wilson farm.

Jessie D. Wood, born in Berne in 1846, joined the Union Army at the age of 16 in the 10th New York Regiment and was also sent to Louisiana. He died at Port Hudson on August 13, 1863 at the age of 17. His grave in the family plot just outside of Berne is marked by a stone topped by a small replica of a Union soldier's hat.

Another young volunteer was Corporal Alonzo Grove Ludden, son of Rev. A. Ludden, pastor of the Lutheran Church of Berne. In 1864, at age 16, Alonzo joined the 177th Regiment and contracted disease in the expedition against Port Hudson, La. Sent home, he never regained his health and died February 16, 1865.

Of the soldiers who survived the war, William Blade of Berne managed to live through imprisonment at Andersonville. It was said that while in prison, he saw another Berne boy, Nathaniel Wright, starve to death. Mr. Blade weighed only 75 pounds when released, and was unable to walk for some time.

Zade West of South Berne became a surveyor for the Union Army. He helped map bridges, road, and areas of attack. Wounded in the left leg, he returned to South Berne, lived to be 96, and died in 1920.

Azor T. Hayes, born in Berne in 1843, was the son of a widow and had several brothers and sisters. His mother did not want him to enlist, but at age 19, he left with many others. In 1866, after the war was over, Azor reenlisted and was killed about a year later. There is no record of the details of his death or place of burial.

Andrew and Irene Willsey sent as least 3 of their nine children to the Civil War; Elias, Stephen, and Abraham. All of them survived and the Willsey family is fortunate to have a collection of letters which the young men wrote while at war.

Among other Berne boys who were killed were John Jost Bogardus, at Cedar Creek in 1864 and William Post at Cold Harbor in 1864, age 22.

These young men of Berne, who played a role in the most bloody war of American history, went off with a fervor unmatched in recent times. Each year, small flags honor their resting places on Memorial Day.

Regiments in which men from Berne served

There were at least 35 men from Berne who served in the 7th Regiment. Some of the Regiments major battles were at Petersburg, Cold Harbor, Weldon Station, Spotsyvania. Six of the men from Berne were killed in battle, or died shortly there after of their wounds. Nine were captured, six of whom died in prison of starvation or disease. One was missing in action. Eight were wounded, of which four were discharged for disability. Click here for more about the 7th Regiment and a listing of the men from the Hilltowns who served in it.

The Civil War Diaries of George H. Warner from 1862 and 1863 are posted on the Berne Historical Project site. George was 17 when he went off to war. He returned home less than a year later and died September 28, 1863 from sickness he had contracted while serving in the Union Army in Louisiana. The following January his younger brother, Peter William Warner, lied about his age and joined the Union Army. Peter died November 1864 in Andersonville Prison at the age of 15.

Also on the Internet are the Civil War letters that Carpenter N. Wright wrote to his father Albert Wright. In his last letter from a camp near Alexandria Virginia he wrote:

Havens, William wounded in foot on picket duty at Petersurg and died in a hospital following the amputation of his leg