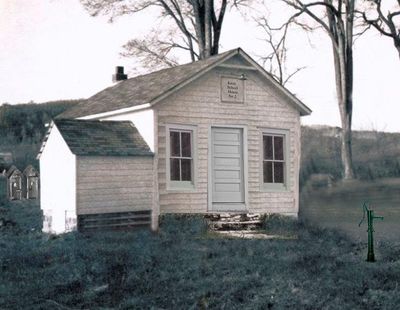 Sandy Warner attended Knox School #2 for Grades 1, 2 & 3 before it closed. Her father, Ernie Walk, was chair of the school board for District #2 when it merged with Berne‐Knox. I recall him telling me that he felt it would have been better for the District to remain independent.

When she went to B‐K for 4th grade she wondered why they were teaching a lot of what they taught because she knew most of it.

The school entrance was on the Witter Road side of the school. The two outhouses were on the other side of the building.

For lunch they frequently went across the street and sat on a platform at the Meth. Church. (The Walks often went to church there.)

She walked to school with Wanda. They sometimes got a ride with the milkman in bad weather. District #2 was transferred to B‐K in 1946.

Attendance was through the 8th grade. After that we went to Altamont High School

Our teacher was Mrs. Norman (now deceased). She lived in a duplex which is still standing as a single home on the corner where you turn in to what was the Plank Roaders

Students that are still alive that I know of: Helen Oliver Quay and Wanda Sturgess Gardner

The school faced Rt 146 but as I remember the entrance was off Witter Rd.

We were lucky to have a pump organ which Mrs. Norman could play so we had music to brighten our day

We always played together at recess. All ages with the bigger kids taking care of and looking out for the smaller children. There was little “picking on” by anyone. There were no “clicks”

Games played: I can think of Red Rover, baseball, dodge ball, Simon Says. We usually were outside every day for fresh air and fun, even in the snow. If it was too nasty, there were inside games and music.

We learned from each other. Each class had its own lesson but we could overhear other’s lessons which served well when the school was consolidated with B‐K‐W. I was farther ahead academically. There was a big black board in the front of the room so we also could see what other classes were studying.

There was a wood stove in the back of the room to keep us warm. And a hand pump well out front for all the fresh water we wanted. Water was kept in a pail, with a dipper for drinking. A basin was provided for “washing up”. This was on a bench in the hall which ran across the front of the school, before entering the main room of desks. Our outer garments were also hung out there.

Spelling Bees were a common thing. I think we had one once a week and the words were picked according to grade level. Some people enjoyed them, I did not.

On nice days we walked across the dirt road (Witter Rd) to sit on the front stone work of the village church. It was always a pleasant time of day.

Twice a year we joined with the Bozenkill one room school, taught by Betty Spadaro, for a day of fun. We would walk down and back (at the bottom of Bell Rd which was narrow and dirt) for one day and they would walk up to our school for one day. This was usually in the spring and the fall. The Bozenkill school is now located on the Altamont Fair grounds.

We had two outhouses. Located at the rear of the school and separated from each other by a tall fence; one for girls and one for boys.

In really cold winter weather, Wanda Sturgess’s Dad would hook up “Dolly” & Nibby” and come for us with the sled. We would snuggle under the blankets and be warm for the mile ride home.

Sometimes the milk man (long before we had cows) would allow my brother George and me to ride in the milk truck to the school. It did not happen often but it was better than walking

The school as I remember it: 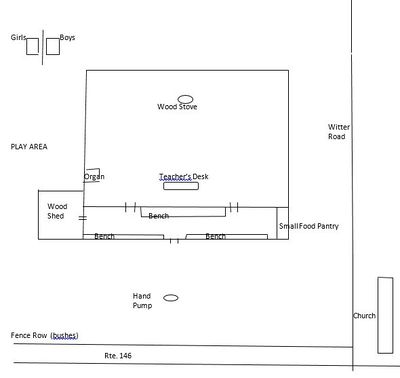