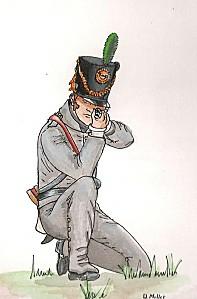 Soldier1812-1 We are trying to create a list of men from Knox who served in the War of 1812. If you know someone who served, please add their name to the list. If you know more about any of them, if would be a fitting tribute to them if you would also create a biography of them. Until then, the only thing we can share with viewers of this page is their name.

We would like to start a biography for each of these people with the basic data about their military service and anything else you care to add. Click on Instructions for Entering Service Personnel for additional help.