From Knox, NY - a Helderberg Hilltown
Revision as of 01:16, 26 September 2012 by JElberfeld (talk | contribs) (Created page with "'''KNOXVILLE ACADEMY''' Knoxville Academy was organized under the general laws of the State of New York for the establishment of Academies about 1820 or 1830 by Gurdon, Gardiner,...")
(diff) ← Older revision | Latest revision (diff) | Newer revision → (diff)
Knox Sesquicentennial: Knoxville Academy
Jump to navigation Jump to search

KNOXVILLE ACADEMY Knoxville Academy was organized under the general laws of the State of New York for the establishment of Academies about 1820 or 1830 by Gurdon, Gardiner, and John Gallup, Dr. Elisha Williams, Dr. Brownell, and Jesse Tyler. It was incorporated by the New York State Legislature in 1837, and admitted by the Regents on February 15, 1842.

Knoxville Academy gave Knox the distinction of having one of the finest educational facilities in Albany County. Tenney and Howell report that it "once stood high among similar educational establishments." The Academy prepared its students for entrance to college, and also qualified them to enter teaching or to go into business. Students came to the Academy not only from Albany, Schenectady, and the surrounding areas, but also from abroad.

An article by Ray Mowers in the Albany Evening News of October 15, 1936 reports, "Many men of future achievement received the preliminary education (at Knoxville Academy) to entrance at Union and other colleges. Some returned after college graduation to teach those who came after them to Knox."

Mr. Mowers also reported that " ... in 1826 the Masonic brethren of the Helderbergs erected a temple in Knox hamlet which later became the celebrated Knox Academy." He also mentions that Knox had the oldest Masonic Chapter, and that after the temple became the Knoxville Academy the chapter went to East Berne and then to Berne. 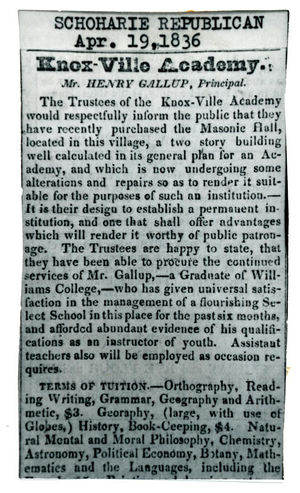 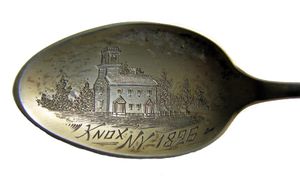 Eventually, following the establishment of the State Normal Schools, Knoxville Academy went into a decline. For a time, an attempt was made to continue the Academy as a private school but this did not prove feasible.

For a number of years after the Academy closed down, the building served as a public school. Later it was converted into three separate apartments and rented. Today [1972] it is owned by Mr. and Mrs. Lewis Tubbs who have made it into a one-family home. The New York State historical marker in front of the house bears witness to the fact that once the famed Knoxville Academy did indeed stand there.

From Tenney and Howell:

Knoxville Academy has done much to promote intelligence in the Town of Knox and vicinity. During the late war of rebellion eleven had entered, from among its students, into the military service for the Union.