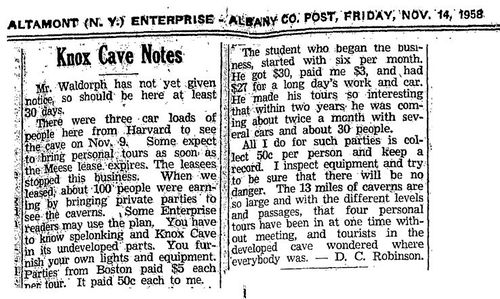 Mr. Waldorph has not yet given notice, so should be here at least 30 days.

There were three car loads of people here from Harvard to see the cave Nov. 9. Some expect to bring personal tours as soon as the Meese lease expires. The leasees stopped this business. When we leased, about 100 people were earning by bringing private parties to see the caverns. Some Enterprise readers may use the plan. You have to know spelunking and Knox Cave in its undeveloped parts. You furnish your own lights and equipment. Parties from Boston paid $5 each per tour. It paid 50¢ each to me.

The student who began the business, started with six per month. He got $30, paid me $3, and had $27 for a long day’s work and car. He made his tours so interesting that within two years he was coming about twice a month with several cars and about 30 people.

All I do for such parties is collect 50¢ per person and keep a record. I inspect equipment and try to be sure that there will be no danger. The 13 miles of caverns are so large and with the different levels and passages, that four personal tours have been in at one time without meeting, and tourists in the developed cave wondered where everybody was. --- D. C. Robinson