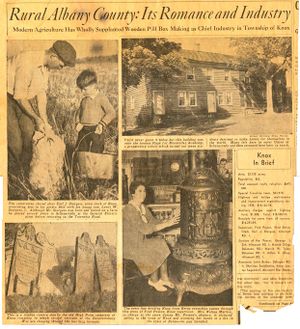 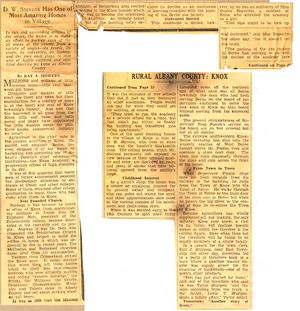 
D. W. Stevens Has One of Most Amazing Homes in Village

In this and succeeding articles of the series, the writer is to make an effort to portray each of the 10 towns of the county from a variety of angles—its people, its crops, its industries, its history, and the part each plays in that unit of highly cultured and civilized America we know as Albany County

By RAY A. MOWERS

Druggists and makers of pills don't use them any more but their manufacture for a century or more is at the heart and soul of Knox township's history. And now that the basswood is all gone from the Knox hills and vales and both metal and paper have supplanted the little wooden boxes for pills, Knox knows commercial industry no longer.

Agriculture is the chief note in the current activities of Knox. Its parent and neighbor. Berne, has even stripped it of the honor of harboring and nurturing one of Al¬bany's County's chief educational institutions—the Knox Academy, a preparatory school of high standing in its day.

It was at this academy that many men of future achievement received the preliminary education to en¬trance at Union and other colleges. Some of them returned after college graduation to teach those who had come after them to Knox.

Perhaps it was because he heard so often of Knox from matriculating students at Union that Dr. Eliphalet Nott, president of the Schenectady college, became interested in the township and its people. Anyway it was Dr. Nott who organized the Presbyterian Church in Knox and helped to build the edifice to house it which was destroyed by fire in recent years. The Methodist, and Reformed churches came later than his organization.

Yankees from Connecticut settled the Knox area. It seems strange that when they left their native heath to their less venturesome brothers who were allegedly making and selling "wooden nutmegs," the Frinks, the Williams, the Crarys, Dennisons, Cheesebroughs, Whip- ples and Tabers came to Albany County and set about making wood¬en pill boxes.

It was in 1826 that the Masonic brethren of Helderberg area erected a temple in the Knox hamlet which was to become the celebrated Academy. An historic tablet of the building today dedares its decline as an institution of learning coincided with the burn¬ing of the Berne axe factory.

This statement is denied, however, by no less an authority of Miss Eunice Bogardus, a resident of Knox, who attended the academy as a girl.

"That sign ought to be torn up and destroyed," said Miss Bogardus the other day, "for it doesn't tell the truth.

The passing of the axe factory in Berne had nothing to do with the decline of the academy here. It was the entrance of free schools that did it just as they destroyed all other academies. People would not pay for what they could get for nothing, of course.

"They tried to run the academy as a private school for a time. but that didn't pay either, so finally the building was transfered into living apartments."

One of the most amazing homes in the village of Knox is that of D. W. Stevens, who lives in what once was the hamlet's blacksmith shop. The ceiling beams, which Mr. Stevens purposely left exposed to view because of their unusual qual¬ity and color, are discolored by years and years of smoke that once bil¬lowed upward from the smithy's forge.

As a smith's shop, the house was a center of childhood interest for its present owner and occupant, who can point out where the anvil and other appurtenances once stood in the various corners of his apart¬ment and front-room store.

When it was decided early in the- 19th Century to split some thirty thousand acres off the northern end of what once was all Berne township, the man who had been serving Berne on the board of su¬pervisors continued to serve the new town of Knox on that board without moving from his ancestral acres.

The present circumstances of Su¬pervisor Fred Posson's service on the board are no less unusual but not at all similar.

The extreme southwestern Knox- Berne township line dips into the westerly reaches of West Berne hamlet where Mr. Posson lives and operates a store next door. The town line runs diagonally through the store and cuts across the front of his house.

From Town to Town

This is a somber camera shot in the old High Point cemetery of Knox township in which several veterans of the Revolutionary War are sleeping through the last long bivouac.

The town line dividing Knox from Berne townships passes through this store of Fred Posson, Knox supervisor. Mrs. Nelson Mattice, in charge at the store during Mr. Posson's absence, is pictured sitting in the town of Knox and warming her hands at a fire in the town of Berne—no pun intended.

Because agriculture has wholly supplanted pill box making, the only industry Knox ever knew, a visit to its farms will disclose bucolic scenes in which the thresher is the central figure. More often than not the threshers will be found to be mostly members of a single family.

In a search for the town clerk, Earl J. Sturgess, near East Town¬ship the other day, directions led to a party of threshers back of a barn where a gasoline tractor en¬gine was supply power for the shucking of buckwheat—one of the town's chief products.

"Earl has just started for home," said one of the threshers who said he was Victor Sturgess "and the man unloading from the truck, is my father, Lewis T. Sturgess. IQuite a family affair." Victor added.

Tomorrow: "Another story of Knox."

You'd never guess it today but this building was once the famous Knox (or Knoxville) Academy, a preparatory school which turned out many students destined to make names for themselves in the world. Many left here to enter Union at Schenectady and then returned here later to teach.

The cameraman chased after Earl J. Sturgess, town clerk of Knox, overtaking him in his potato field with his young son, Lewis W. Sturgess, 5. Although Mr. Sturgess was born and reared on a farm he passed several years in Schenectady at the General Electric plant before returning to the Township Road.