1934 - Knox is Smallest Town in County of Albany

From Knox, NY - a Helderberg Hilltown
1934 - Knox is Smallest Town in County of Albany
Jump to navigation Jump to search 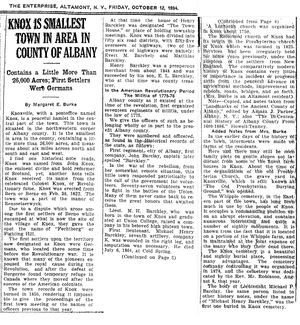 KNOX IS SMALLEST TOWN IN AREA IN COUNTY OF ALBANY

Contains a Little More Than 26,000 Acres; First Settlers Were Germans

Knoxville, with a postoffice named Knox, is a peaceful hamlet in the central part of the town. This town is situated in the northwestern corner of Albany county. It is the smallest in area in the county, containing a little more than 26,000 acres, and measures about six miles across north and south and east and. west.

I find one historical note reads, Knox was named from John Knox, the eminent divine and bold reformer of Scotland, yet, another note tells Knox received its name from the celebrated Colonel Knox, of Revolutionary fame. Knox was erected from Bern or Berne on Feb. 28, 1822. The town was a part of the manor of Rensselaerwyck.

Due to a dispute which arose among the first settlers of Berne while encamped at what is now the site of the village of Knox, they gave the spot the name of "Fechtberg" or Fighting Hill.

The first settlers upon the territory now designated as Knox were Germans, who located, there some time before the Revolutionary war. It is known that many of the pioneers espoused the royal cause during the Revolution, and after the defeat of Burgoyne found temporary refuge in Canada where they moved after the success of the American colonists.

The town records of Knox were burned in 1850, rendering it impossible to give the proceedings of the first town meeting or the names of officers previous to that year.

Henry Barckley was a prosperous merchant from about 1848 and was succeeded by his son, E. L. Barckley, who at that time was county treasurer.

In the American Revolutionary Period
The Militia of 1776-76

Albany county as it existed at the time of the revolution, first organized seventeen regiments of militia, under the law of 1776. We give the officers of such as belonging wholly or in part to the present Albany county.

They were numbered and officered, as found to the Historical records of the state, as follows:

In the war of the rebellion, from her somewhat remote situation, this little town responded patriotically to the call of the government for volunteers. Seventy-seven volunteers went to fight in the battles of the Union. Many of them never came back to receive the great honors that awaited them.

Lieut. M. H. Barckley, who was born in the town of Knox and graduated at Union College, raised a company in his beloved high plateau town. First lieutenant, Michael Henry Barckley, seventh artillery, company K, was wounded in the right leg, and amputation was necessary. He died July 6, 1864, at Cold Spring.

A Lutheran church was organized in Knox about 1750.

The Reformed church of Knox had its origin in the Presbyterian church of Knox which was formed in 1825. Services had been irregularly held for some years previously, under the auspices of the settlers from New England. The comparatively modern history of Knox contains very little of importance in incident or progress aside from the peaceful advance in agricultural methods, improvement in schools, roads, bridges, and so forth. (Mrs. Burke is an Altamont resident).

Note—Copied, and notes taken from "Landmarks of the Ancient County of Albany," edited by Amasa J. Parker, Albany, N. Y.; also "The Bi-Centennial History of Albany County From 1609-1886." Howell-Tenney.

In the earlier days of the history of the town, interments were made on farms of the residents.

Here and there may still be seen family plots on gentle slopes not far distant from some of th finest farm houses in Knox. About the time of the organization of the old Presbyterian Church, the grave yard in Knoxville, which is still known as "The Old Presbyterian Burying Ground," was opened.

The Whipple cemetery, in the Eastern part of the town, has long been much in use by the people of Knox It occupies a commanding position upon an abrupt elevation, and contains numerous interesting and quite a number of sightly monuments. It is known from the fact that it is located on a portion of the Whipple farm, and is maintained at the joint expense of the many who bury their dead there.

The Knox cemetery is a beautiful and sightly burial place, possessing many advantages. The cemetery company controlling it was organized in 1874, and the cemetery was dedicated by the Rev. Mr. Robinson, August 8, that year.

The body of lieutenant Michael P. Barclay, the same person listed in other history notes, under the name of "Michael Henry Barckley," was the first one buried in Knox cemetery.