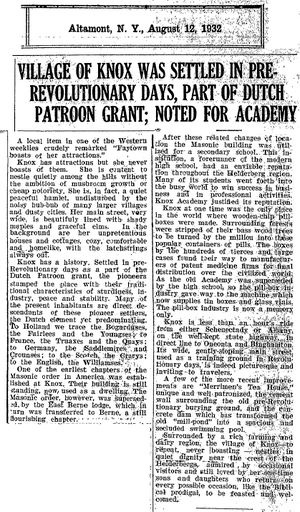 Village of Knox was Settled in Pre-Revolutionary Days, Part of Dutch Patroon Grant; Noted for Academy

A local item in one of the Western weeklies crudely remarked "Faytown boasts of her attractions."

Knox has attraction but she never boasts of them. She is content to nestle quietly among the hills without the ambition of mushroom growth of cheap notoriety. She is, in fact, a quiet peaceful hamlet, undisturbed by the noisy hub-bub of many larger villages and dusty cities. Her main street, very wide, is beautifully lined with shady maples and graceful elms. In the background are her unpretentious houses and cottages, cozy, comfortable and homelike, with the latchstrings always out.

Knox has a history. Settled in pre-Revolutionary days as a part of the Dutch Patroon grant, the pioneers stamped the place with their traditional characteristics of sturdiness, industry, peace and stability. Many of the present inhabitants are direct descendants of these pioneer settlers, the Dutch element yet predominating. To Holland we trace the Bogarduses, the Fairlees and the Youngses; to France, the Truaxes and the Quays; to Germany, the Saddlemires and Crounses; to the Scotch, the Crarys; to the English, the Williamses.

One of the earliest chapters of the Masonic order in America was established in Knox. Their building is still standing, no uses as a dwelling. The Masonic order, however, was superseded by the East Berne lodge, which in turn was transferred to Berne, a still flourishing chapter.

After these related changes of location the Masonic building was utilized for a secondary school. This institution, a forerunner of the modern high school, had an enviable reputation throughout the Helderberg region. Many of its students went forth into the busy world to win success in business and in professional activities. Knox Academy justified its reputation.

Knox at one time was the only place in the world where wooden chip pillboxes were made. Surrounding forests were stripped of their bass wood tress to be turned by the million into these popular containers of pills. The boxes by the hundreds of tierces and large cases found their way to manufacturers of patent medicine firms for final distribution over the civilized world. As the old academy was superseded by the high school, so the pillbox industry gave way to the machine which now supplies tin boxes and glass vials. The pill-box industry is now a memory only.

Knox is less than an hour's ride from either Schenectady or Albany, on the well-kept state highway, in direct line to Oneonta and Binghamton. Its wide gently sloping main street, used as a training ground in the Revolutionary days, is indeed picturesque and inviting to travelers.

A few of the more recent improvements are "Merrimen's Tea House," unique and well patronized, the cement wall surrounding the old pre-Revolutionary burying ground, and the concrete dam which has transformed the old "mill-pond" into a spacious and secluded swimming pool.

Surrounded by a rich farming and dairy region, the village of Knox - to repeat, never boasting - nestles in quiet dignity near the crest of the Helderbergs, admired y occasional visitors and still loved by her one time sons and daughters who return on every possible occasion, like the Biblical prodigal, to be feasted and welcomed.