Difference between revisions of "First Regiment of Mounted Rifles" 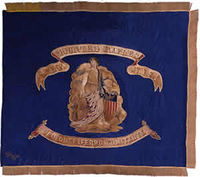 Among those killed in action: