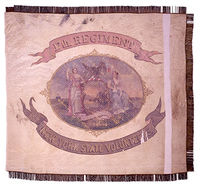 The companies were recruited primarily in the New York City and surrounding areas and left the state June 21, 1861.