Difference between revisions of "134th Infantry" 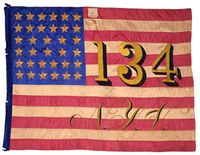 
The companies were recruited principally at Schenectady and Schoharie Counties.


The regiment was heavily engaged at Gettysburg, in the battle of the first day, and in the gallant defense of Cemetery hill on the second day, meeting with a loss of 42 killed, 151 wounded and 59 missing, a total of 252 out of 400 in action.