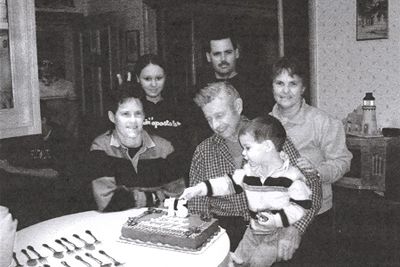 We moved to the farm on May 3, 1938. I was 7 and Carl was almost 9. The farm had not been in operation for sometime as Grandfather was ill and could not care for it. My father had to restock the farm with cattle and needed equipment. There was a lot to do. The fields were overgrown and needed attention. Right away Carl and I had to start with chores before and after school. I usually cleaned the horses, there were two of them and Carl cleaned out the cows. Most of the time we had nine cows. Each of us, Father, Carl and I milked three cows. The milk was then strained (especially if the cow put its foot in the milk pail) and put in the large milk can. This was placed in the cooler until Ray Stevens came and picked it up.

We also raised chickens and pigs. There were probably 100 chickens. One of my jobs was to clean and weigh the eggs on an egg scale that determined the size of the egg. These were put into crates that probably held about 30 dozen - then sold to a man that came around and picked them up. A pig story I remember was on a very cold day probably -30 in the early 40’s. My father was up all night with a sow having her litter; she tried to kill them as fast as they were born. My father would bring them into the kitchen for us to care for. There must have been about 13 of them. Along with trying to keep all these piglets fed - the new furnace developed a problem. The furnace had come from Syracuse - my father kept calling to get someone to fix it. The company could not get the part or send anyone to Berne at that time. We had to get out the old heater and set it back up in the living room.

I remember my father putting an addition of a kitchen on the south end of the house. The old kitchen was almost the width of the house on the opposite end. You could enter it either by the woodshed or the porch. Another thing I remember is a two-car garage type addition that was on the Red house. My father removed that. Speaking of the red house, Carl and I slept out there all summer long for years. It sure was a lot cooler than the upstairs. We had a ping-pong table set up in there as well as a dartboard. We spent a lot of time playing those.

Carl and I did a lot of the farm work with father. We had an Allis-Chalmer that would not fit in the barn so we used the horses for the fieldwork. My father and Hadley Simons bought that tractor together, thinking they both could use it. That did not work well as it was always on the other person's farm when it was needed. My father bought out Hadley's share and Hadley bought another one.

When I was a young boy, my father and I were Cultivating corn in the field where my house now stands. I was on the horse and my father was on the cultivator. My job was to guide the horse. The horse caught its' foot in a page wire fence that had fallen down, he slipped down the embankment to the road. When the horse fell, he landed on me. Boy, did my father get down that bank fast. He put his arms around me and when the horse tried to get up pulled me free. As it turned out neither the horse nor I was injured badly. My father took me down to the house and told me to sit on the porch. Then he told my Mother "He needs a dish of strawberry shortcake".

In the fall we gathered apples for cider. This was kept in large barrels. In the winter we would cut the wood for heating the house. Also there was an outfit that would come here and cut the ice out of the lake. My father would store some of it in the icehouse for use by the summer people.

Another thing I remember is going down to the Berne-Knox school when it was being built. Carl and I would ride down with Grandfather Gallup who was on the school board. We would play around where the front of the original school was being bricked. I can remember riding in an old car with him. (Later he had a 36 Dodge that Carl and I eventually drove) that was before I started school. I was probably one of the first classes; I started when the school was about three years old.

I played on the basketball team. We did not try out like they do today. There were so few boys that anyone who wanted could be on the team. Neither Carl nor I could play much baseball as that was in the spring and there was too much farm work to do. I do remember on the way home from basketball practice we would go all the way to Westerlo on the way home. In Westerlo, we would stop at Jiggs and get a hamburger, ice cream or whatever before going home. They tried to get a football team going but could never get enough interested in it. We did not have time for that either. School ran from 9 in the morning until about 3:30. A lot different from today. Sometimes I would get to drive my grandfather's car to school when I just accidentally missed the bus! I got my license the summer after I turned 16.

Another thing I remember - There was an elderly man in a wheel chair that lived next to where the Post Office used to be. I would go down every day and carry water to his house from the end of the long building. I got 25 cents a day. Also I would ride my bike down along the lake and sell vegetables like green beans to the summer people - I would get to keep the money that I made. My father always made sure we had money and would check with us to make sure we had some. If not, he would give us some.

Back around 1948 a family by the name of Hewson lived in the Leland Filkins' house. He worked for GE. He put together a Television with an antenna made out of aluminum cans. This was the first TV I ever watched. Man, what a room he had. It was filled with all types of radio equipment. He always tinkered with my car radio. He was some kind of an engineer with GE.

After Carl graduated from school, he, Charles Simons and Bob Herzog bought a hay press and went around and pressed hay for the farmers. I would skip school to go with them.

After I graduated, I got a job with The Cider Mill in Voorheesville. My father said, " You won't last down there. They WORK there!" Little did he know I felt like I was on vacation.

The first car I bought was a two-tone blue 1941 Chevy. It was the car of the day that all young people wanted. I worked and saved my money. I had $350 in my pocket when I stopped in at Westfall Chevrolet in Altamont to see how much the 41 Chevy was. There was someone working there who had to phone Westfall and ask him the price. He came back to me and said the price was $350. I bought it! When I first went in the service I parked my car over by the camps. I came home on leave just before I left for Arkansas. I got my car out and used it. As my mother was getting ready to take me to the bus I reached in my pocket, pulled out the keys and said to Homer "CATCH" tossing the keys to him. I let him drive the car all the while I was in Korea.

After traveling the US and serving in the Korean War, I decided there was no place like Warner’s Lake to live. Now that I have raised three children Chester, Nancy and Christopher and have four Grandchildren Mike, Josh, Andrea and Logan, I still feel the same way.