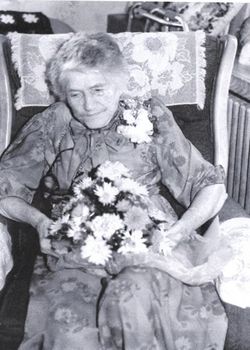 I am proud to dedicate this family history to my Grandmother, Christina Messer Snyder. She has been the force that has kept this family together during the good times and the bad. She has watched her country fight in four wars and prayed for her young sons to return safely to her. She has been there to celebrate births, baptismals, graduations, weddings and deaths. She has shared all of our joys, as we accomplished our goals. Christina has not only been there during the happy times but she has been our support during the sad times too.

Christina was born in the wilderness area of Berne and has been a country girl all her life. At the age of eight she had to help her brothers bring in the hop harvest. Many a trip she took with her father to Berne using a horse and wagon and she remembers the trips to Rensselaerville to the Grist Mill. She attended a small rural schoolhouse and daily she walked the cold miles back and forth to school.

Shortly after her marriage she watched her young husband join the army and leave for Macon, Georgia. The thrill she must have felt to own the old Snyder house! That was until she realized the years of renovations that lay ahead. The cellar had to be blasted. What is now the kitchen was just a woodshed, and the present day living room was the kitchen area. Some place near the living room closet was once an old pump and this was used to pump the water up from a spring located down the hill near Frank Hills.

She supported her husband, Walter Snyder, in his many endeavors. All but the youngest of her Grandchildren must remember the bees. Only the fortunate can say they were never stung by Grandpa’s honeybees. Walter always had bees and his children spent hours swinging from the two ash trees watching so the bees did not swarm. Vi remembers one summer day when her Mom and Dad were at a Shaver reunion in Harpersfield and the bees swarmed and John caught them in a basket and somehow got them into the woodshed connected to the house. I can just imagine Grandma’s expression, to come home and find the bees flying around.

Grandpa always had animals and it was always someone else’s responsibility to wander the pastures and bring them back to the barn at milk time. I wonder if George remembers one day when Vi and he wandered upon an old man carrying skins that were all bloody and probably caused the two of them to run all the way home. Grandma was always responsible for keeping the milk dishes clean and every morning she went to the barn to wash the milk machines and would bring back fresh milk for the family to drink.

The daily chores of keeping a large family in clean clothes and good food on the table never ended. Water had to be heated on the stove and many hours were spent using a scrub board to clean the boy’s clothes. Grandma canned every form of fruit and vegetable she could locate. The pantry was full of jars of pears, apples, peaches, blackberries, plums as well as vegetables. Meats would spoil without a freezer so she also canned the meat after the boys had butchered a pig or cow. In the beginning there was only kerosene lamps until John got a generator in the basement that he would start in the evening to give each room one small light bulb. In 1932 electricity came to the farmhouse, but the outhouse, which was located out back, was used until 1950.

Grandma had to worry about both her children and her husband. One of Grandpa’s many jobs was to cut ice on Lake Underdonk and sell it to the local people for their iceboxes. One day he fell through the ice and if a neighbor hadn’t heard his call for help he would have drowned. None of us can even imagine the terror this young couple went through the day their young son was taken from them by drowning that spring long ago, but we all can realize why the gully was filled in with dirt and we were never allowed near the ponds without a grownup.

All was not work on the Snyder farm. The children spent many a summer day swimming in the creek; that was until the dog days of August came and then Grandpa would forbid them near the water. He had a fear of Polio and other illnesses that might be connected with stagnant water. On the 4th of July there was always fireworks, the older you were the bigger the fireworks you received. I understand the only child to be injured by them was Ted. Every Sunday Grandma made all kinds of homemade ice cream for her whole family.

Each of us will have our memories. Her Grandchildren span several decades but we all have our memories. How many hours did some of you watch her brush and braid that long hair? Did you ever catch her at her sewing machine? Her stove never seemed to be out; there was always a stick of wood burning. In the oven you might find oatmeal or molasses cookies, corn bread, baked beans, or a roasted chicken. When I was young Grandma broke her arm and I remember Dick and I were afraid to look at her because we were sure that part of her arm was gone. Were we relieved to see her fingers wiggle outside of the cast? Did you ever play softball in the sand pit as the swallows flew above you? This memory might be connected with a picnic for Grandpa’s birthday in early June. Do you remember helping to feed the chickens and reaching under the hen to get that warm egg? How about sitting on the swing under the old apple tree and watching the world go by?

Her Great-Grandchildren’s memories are of a quieter time. Of a proud, alert lady who sits quietly by the table, book near by. You can see her glowing with pride as each new grandchild takes their first steps towards her and grips those long fingers on her outstretched hand.

Yes, we all have our memories of Grandma but our biggest and best is found every Christmas as we meet and greet each other, possibly for the first time since last December. This is the one time a year when the Snyder’s all come home. We have to all be proud to carry her genes in us. This is her 94th Christmas. She has memories of past years too, of other children and family members.