Gabriel's military service files says he died of disease 7 Dec., 1864 on Federal Hill, Baltimore, MD.[6] Heroes of Albany is misleading in implying that he died in a battle at Ft. McHenry. There was no battle there in Dec. 1864.

Gabriel has a tombstone in the Lake Rural Cemetery, East Berne, next to his father Daniel Gabriel Secor. It says he died Dec. 6, 1864, age 24. [7]. Perhaps the stone is a memorial stone and he is actually buried at in Maryland.

29 Jul 1893 Sarah Secor, widow of Daniel Gabriel Secor, applied for a Civil War pension based on the service of Gabriel Secor in Co. D, 91st NY Inf. Her relationship was given as Mother.

The Roll of Honor, Vol. XIX , Ancestry.com military records states that Gabriel is buried at the Loudon Park National Cemetery, near Baltimore, MD. The entry after his name for burial in the same cemetery is William H. Secor of the 9th Artillery who died on July 2, 1864.

(Gabriel HENRY Secor was also from Knox in 91st D, but he survived the war.) 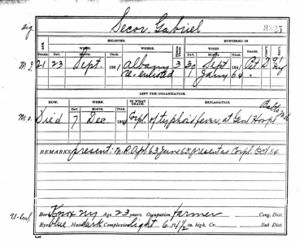