Philip Schermerhorn died at his home Aug. 27th (1908) at the of age 77 years and 10 months. He had been ill for many months both mentally and physically owing to a stroke of paralysis. Mr. Schermerhorn was born in the town of Berne but moved in this town in his boyhood days and resided here until his death. He was among the first to respond to President Lincoln's call for volunteers and joined the 3d New York, in which be served faithfully and well until be was honorably discharged. He was a quiet good neighbor.

It has been said that his kindness and generosity to the poor was a reproach to professing Christians. Many times has he carried the necessaries of life to the deserving poor, and many who came to his door hungry have gone away satisfied. Never did the worthy poor appeal in vain. At the funeral services the pastor of the M. E. church gave a very appropriate discourse, comparing the enlisted and enrolled soldiers of war to the soldiers of the cross who fought the fight and finished the course.

His funeral was attended by the G. A. R. some of whom acted as bearers. His daughter, Mrs. Brust, and family desire to thank the friends and neighbor and especially the G. A. R. for their kindness and sympathy in their bereavement. The deceased is survived by one brother J. Schermerborn of Albany. Interment is Prospect Hill Cemetery. 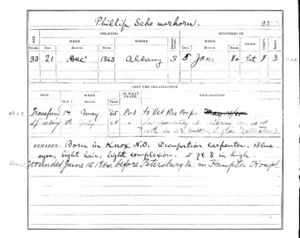