George Rendo married Ethel Townsend who died in the 1920's. - from Margaret Toruk. Their children were: 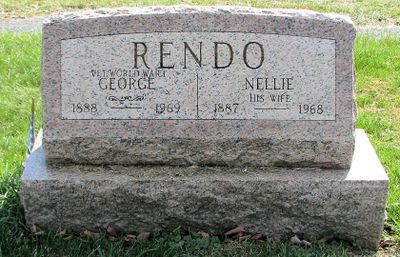 You left us a year. But your memory is with us always.

Born June 3, 1938 in Albany, son of John Crosier Sr. and Helen Rendo Crosier, Mr. Crosier was a lifelong resident of East Berne, graduating from Berne-Knox High School in 1957. He was a car salesman for several Capital District car dealers over the years before starting his own business, Crosier Associates.

Mr. and Mrs. James Gibbs and children of Saratoga spent Christmas with her parents, Mr. and Mrs. George Rendo.

The sympathy of the entire district is extended to our friend, George Rendo, and the members of his family, in the great loss they have sustained. Faith sustains us in this hour, and we look to Him "who doeth all things well." "Thou knowest not now, but thou shalt know hereafter."

Mr. and Mrs. George Rendo and children Helen, John and Wallace spent Tuesday afternoon at Frank Quay's. Mr. and Mrs. Fred Rendo are spending some time with their daughter and family, Mrs. John Finegan at Schenectady.

Peter Townsend of Schenectndy was an over Sunday guest at his daughter, Mrs. George Rendo.

Rev and Mrs Robert O'Donnell and son Timothy, of Neptune N.J., were overnight guests at the home of Mr. and Mrs. Harry Gibbs. Mr. O'Donnell came to officiate at the funeral of Mrs. George Rendo Mrs. Jeanne Gibbs, daughter of Mrs. Rendo, is a sister-in-law of Mrs. O'Donnell.