Reed B. Griffen was born in Westerlo, Albany County, NY on February 4,[1] 1832.[2] His surname was spelled Griffin by Robert Keating in the book Carnival of Blood.[2]

Reed Griffen was born in Westerlo on February 4, 1832, a son of John Griffen and Rebecca Haines [3] After the death of his father, his mother married Roswell Castle.

Reed worked as a farmer before he served in the Civil War.[2]

Reed died at about 1879 and is probably buried at the Rensselaerville Cemetery, but no marker exists. His widow applied for his Civil War Pension on February 22, 1879
Belinda, his wife, died on December 4, ____ age 74 years. The photograph of the marker is barely legible, but does contain the name of her husband and has a flag and veteran insignia, so it was likely provided by the military. 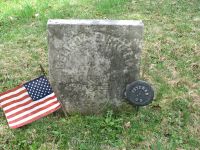