John M. Quay (John Miner Quay) was born Sept. 1844 in Knox, Albany County, NY[1] He had an older brother Paul Quay.[1] They were the sons of John Jacob Quay and Elizabeth Hane.[2]

John worked as a pill box maker before he enlisted in the 7th Heavy Artillery Regiment.[1]

John M. Quay, an old resident of Knox, died suddenly Sunday, aged 68 years. His funeral was largely attended from the Reformed church Tuesday afternoon, Rev. Wm. Davis conducting the services. Noah Lodge, F. & A. M., of Altamont conducted the services at the grave. There was also a large attendance from Berne Lodge of Masons. Mr. Quay was also a member of M. H. Barclay Post, G. A. R., and a few comrades from their fast depleting ranks were present. Mr. Quay was the last survivor but one, Charles Baxter of Delmar of 22 who went to the front from the village of Knox in the early sixties, of which number only five returned. His passing removes a man of sterling worth, leaving to his children the precious legacy of an upright, conscientious life.[9] 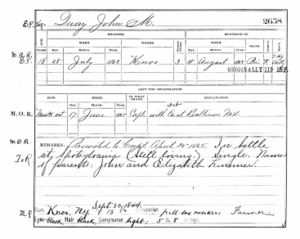