Difference between revisions of "Peter Turner"

He married his first wife on December 14, 1784, when he was 20 years old, at Titherington, Cheshire, England. Her name was Martha Orme. The couple had nine children- Aaron, Susannah, Ann, Mary, Elizabeth, George, Martha, Peter and Bridget. 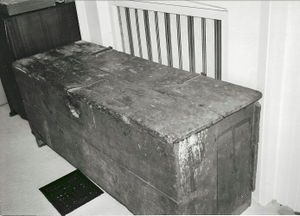 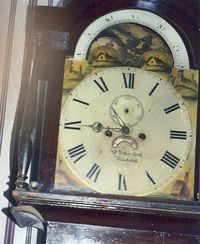 Since economic conditions were quite poor in England in the early 1800's, Peter decided to emigrate to America to better his situation. He and Sarah together with their four surviving children immigrated to America in 1827. Traveling with them were Peter and Mary, children by his first wife, Martha Orme, and James Wood, Mary's husband. It took them 11 weeks to cross the Atlantic Ocean in a small sailing vessel. They landed at Perth Amboy, NJ, where they remained a few weeks. Then they sailed up the Hudson River to Catskill, NY and from there to Rensselaerville, NY, where they stayed awhile before moving to a farm on West Mountain, (lot 444) Berne Township, Albany County, NY, April 9, 1827. There their two other children, Arabella and Richard were born there.

When the Turners came to America they brought their possessions in a large wooden chest. In it, among other items, were the works for a grandfather clock made in Macclesfield, Eng. The clock and chest inscribed with the letters P. T. for Peter Turner, are still in family possession.

The soil was very poor on that farm. It was difficult to make a living off of it. Peter farmed it until his death on January 15th 1839, having been in America only 12 years. He died of a lung problem possibly pneumonia. He was buried in the Turner Burial Ground on West Mountain. Sarah died May 18, 1857 and was buried there also.

Most of the farms on West Mountain were abandoned in future years and became over run with brush and trees. Partridge Run State Forest has taken over the land now. The only thing remaining is the Turner Burial Ground. It had been on George Turner's farm near Bradt Hollow road.

Over the years the cemetery became overgrown with weeds and was not visible from the road. Alice Turner Francis, great granddaughter of Peter, knew of the approximate area to look for it. Later her son, Jay C. Francis and his son Jay T. searched for it and found it. They cleared the brush out so it could be seen from the road. It is being restored by members of Berne Historical Group.