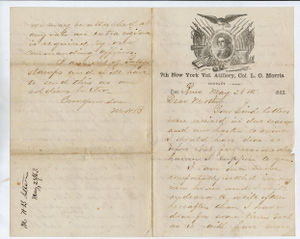 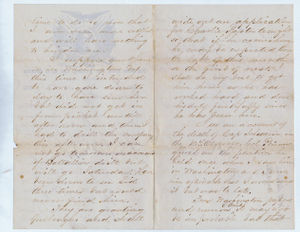 Dear Mother Your kind letters were received in due season and now hasten to answer. I should have done so before but for reasons already known I suppose to you.

I am in a ??? comfortably settled in my new house and I will endeavor to write oftener hereafter than I have done for some time back as I will have more time to do now that I am once more settled and will have nothing to hinder me.

I suppose Aunt Jane is in Washington. By this time I intended to have gone down to day to have seen her but did not get in from picket untill after noon and then I had the drill the company this afternoon. I can not go to ??? now on account of Battallion drill but will go Saturday. Have been down to see Sid three times but could never find him.

They are granting furloughs and shall write out an application for Charlie Baxter tonight so that if he comes home he may be expected there the last of this month of the first of next. I shall do my best to get him home as he has worked hard and done his duty faithfully since he has been here.

I see an account of the death of Cap. Schemver? in the N. Y. Observer. Col. Plisneim?? Offered me the position he held once when I saw him in Washington and I wrote him afterwards that I would accept it but was to late.

From Washington papers and sermons? I think it may not be improbable but that we may be attacked at any rate our extra vigilance is required by order commanding officers.

I am out of postage stamps and will have to send this as a soldiers letter.