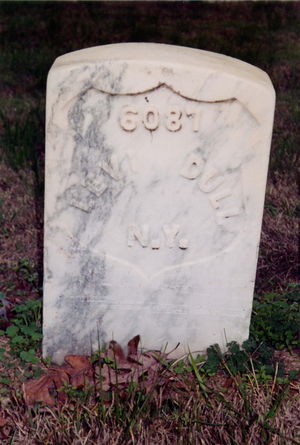 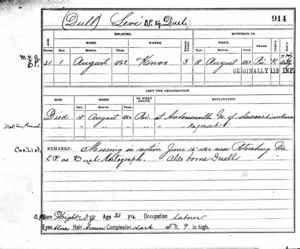 Military records at the National Archives contain the actual enlistment papers signed by him personally; muster log extracts covering two years that reflect him going from present for duty, to missing in action 16 Jun 1864, to "captured by the enemy," to died at Andersonville, GA, with grave number. There are several documents related to the confirmation of his death as a POW, and subsequent discharge in that status. The muster in log contains a physical description at enlistment: 21 years, 5'9" with brown hair, dark complexion.

Levi Duel, private, Company K, 7th N. Y. Heavy Artillery; born in the town of Schoharie, in 1841; enlisted August 4, 1862 ; was captured during the battle in front of Petersburgh, and died in Andersonville prison, August 15, 1864.