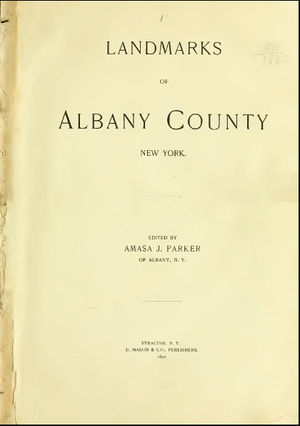 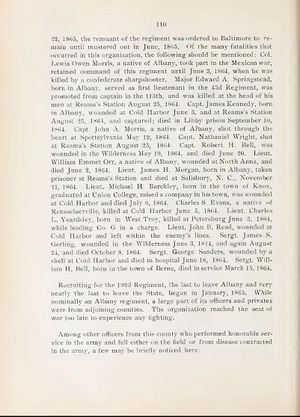 On the 2d of July, 1863, a call was made for 300,000 men, under which the quota of New York State was 59,705, but the vState furnished 78,904. Recruiting and other military operations at Albany now 'le- gan in earnest. It was clearly seen that the war was not to be, as at first anticipated, a brief and unimportant struggle, and throughout the North the work of raising troops to aid the cause was taken up with vigor. The 11.3th Regiment (or the 7th Regiment New York Volunteer Artillery) was organized in Albany county, under the proposition that each senatorial district should raise one regiment with the utmost possible dispatch. A committee was appointed consisting of Eli Perry, J. F. Rathbone, Lyman Tremain, J. Tracey, T. W. Olcott, George Dawson, C. B. Cochrane, J. V. L. Pruyn, Franklin Townsend, Samuel Anable, W. M. \'an Antwerp, George H. Thatcher, and Henry A. Brigham, and the first man enlisted for the regiment signed the roll July 24, 18G2. So energetically was the work prosecuted that over 1,100 men were mustered in on August 18, 1862, with the following field and staff officers:

22, 18G5, the remnant oi the regiment was ordered to Baltimore to remain until mustered out in June, 1805. Of the many fatalities that occurred in this organization, the following should be mentioned: Col. I^ewis Owen Morris, a native of Albany, took part in the Mexican war, retained command of this regiment until June 3, 18(j4, when he was killed by a confederate sharpshooter. Major Edward A. Springstead, born in Albany, served as first lieutenant in the 43d Regiment, was promoted from captain in the 113th, and was killed at the head of his men at Reams's Station August 25, 1864. Capt. James Kennedy, born in Albany, wounded at Cold Harbor June 3, and at Reams's Station August 25, 1864, and captured; died in Libby prison September 10, 1S64. Capt. John A. Morris, a native of Albany, shot through the heart at Spottsylvania May 19, 1864. Capt. Nathaniel Wright, shot at Reams's Station August 25, 1864. Capt. Robert H. Bell, was wounded in the Wilderness May 19, 1864, and died June 20. Lieut. William Emmet Orr, a native of Albany, wounded at North Anna, and died June 2, 1864. Lieut. James H. Morgan, born in Albany, taken prisoner at Reams's Station and died at Salisbury, N. C, November 21, 1864. Lieut. Michael H. Barckley, born in the town of Knox, graduated at Union College, raised a company in his town, was wounded at Cold Harbor and died July 6, 1864. Charles S. Evans, a native of Rensselaerville, killed at Cold Harbor June 5, 1864. Lieut. Charles L. Yeardsley, born in West Troy, killed at Petersburg June 3, 1864, while leading Co. G in a charge. Lieut. John B. Read, wounded at Cold Harbor and left within the enemy's lines. Sergt. James S. Gerling, wounded in the Wilderness June 3, 1814, and again August 24, and died October 8, 1864. Sergt. George Sanders, wounded by a shell at Cold Harbor and died in hospital June 18, 1864. Sergt. William H. Bell, born in the town of Berne, died in service March 15, 1864.

Recruiting for the r.i2d Regiment, the last to leave Albany and very nearly the last to leave the State, began in January, 1865. While nominally an Albany regiment, a large part of its officers and privates were from adjoining counties. The organization reached the seat of war too late to experience any fighting.