John Calvin Kniskern was born on November 1, 1835 in the Town of Knox and baptized May 15, 1836 at Beaverdam Reformed Church. He was the son of Jacob Kniskern and Catherine E. Haverly.

Married, first, Angeline Esther Decker on March 24, 1864. Angeline was born on March 1, 1845 in South Berne, the daughter of Michael Decker and Elizabeth Bovie. (Angeline died on December 13, 1869 in Town of Berne.)

In 1889, John hosted the wedding of his daughter Hattie. "The marriage of Mr. Charles Deitz of Albany, and Miss Hattie Kniskern of West Berne, occurred at the residence of the bride’s father on Wednesday evening, October 9th. The ceremony was performed by Rev. Mr. Wurts. The bridal party included the immediate relatives of the bride and groom. Mr. and Mrs. Deitz will reside in Albany, where Mr. Deitz is engaged in business." (Altamont Enterprise, October 12, 1889). By 1892, John and Aurelia had two children left at home, Robert 18 and Nellie 12, in the Town of Berne, and the same, in 1900 Berne.

About 1905/1906, John swapped homesteads with his son Robert; Robert moved into John's farm in Bradt Hollow and John moved into Robert's house. 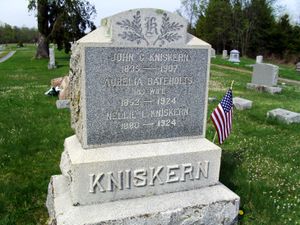