John Smith (John Hurst) (John Schetter) was born in November of 1837 in Canada to John Smith and Mary Hurst.[1][2]

Before he enlisted in the Civil War, John worked as a farmer.[1]

John escaped death on the battlefield when he was wounded at Spotsylvania on May 19, 1864 only to die from typhoid fever ten months later on March 16, 1865. His remains were buried in Baltimore, Maryland. 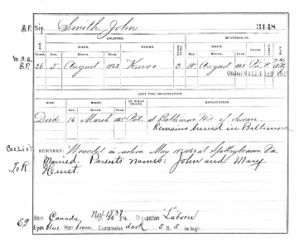 Hard to be sure with a common name like John Smith. Not listed as born in Canada. Also single when enlisted?